No Sense of Personal Space 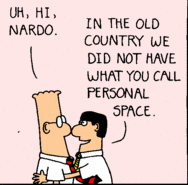 Some people can be very friendly. Very, very uncomfortably friendly.

It isn't just that they tend to stand too close when they're talking to people—it's that they're practically on them. You may even be complete strangers, but that doesn't stop them from hanging off of you and breathing your CO2 during the conversation, whether you like it or not. It doesn't help that they tend to get... er, grabby.

Somebody with No Sense of Personal Space may keep their targets of uncomfortable closeness down to one person, or they might be like this with everyone. The character might be a Cloudcuckoolander that just doesn't know better, or they may just really, really like you (or everyone), and just don't let some bothersome "social etiquette" get in the way of it. Then again, they just might be trying to get you riled up for shits and giggles. This tendency usually comes with inappropriate uses of First-Name Basis.

Anime characters with No Sense of Personal Space love to implement The Glomp as their favored tactic. For best results, have them latch onto someone that Hates Being Touched. It can also a be good source of Ho Yay, Foe Yay, or Les Yay. Compare Cuddle Bug.

Not to be confused with the Personal Space Invader, which deals with grabby Mooks in video games.

Examples of No Sense of Personal Space include:

Germany: Hey Austria, what type of relationship do you call it when you see them everyday, and they hug and kiss you, and go in the bath with you, and sleep in the same bed with you (while they're naked)?
Austria: (blushing) ...Don't say such vulgar things!
Germany: (despaired) Vulgar....?!
Austria: Oh, you meant him...

Jim: You have to stop touching me.

Dean: Cas, we've talked about this. Personal space.
Castiel: (backing off like three inches) My apologies.

Chandler: (with his hand inches from Joey's face) Not touching! Can't get mad!

Dan: I even miss Chuck Bass, who would get so close to talk.

Squidward: SpongeBob? Do you remember that little talk we had about personal space?