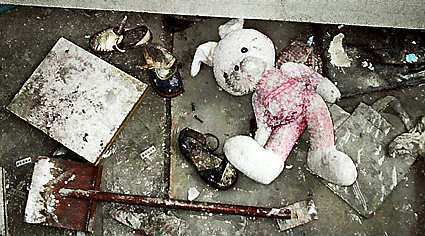 "Something about that doll there on the desolate plain struck a note of terrible sadness in Sister's heart. Where was the child to whom this doll belonged? Blown away with the wind? Or buried and lying dead under the earth?"
—Swan Song

Whenever a movie wants to add pathos to an evacuation or war scene, expect a shot of an abandoned toy, usually a doll or stuffed animal. Teddy bears and bunnies seem to be the most popular, and the more worn and tattered the better.

When used well, can undermine the A Million Is a Statistic effect.

With an adult character, it may be some other Iconic Item.

Examples of Empathy Doll Shot include: