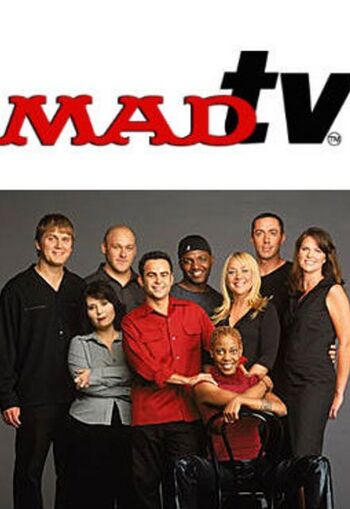 A Sketch Comedy show that aired on FOX on Saturday nights at 11:00 Eastern Standard Time [1]. It was on the air for 14 seasons, running from 1995 to 2009 on the FOX Network. The show was based on Mad Magazine despite having next to nothing to do with it after the third season.

The show, after serving 14 years as Saturday Night Live's rival, was canceled by FOX in 2009, citing low ratings. There have been claims that the show will seek new life on cable TV, though, as of 2012, the only evidence of a Mad TV revival on cable is in the form of a Cartoon Network animated sketch show called MAD, which, unlike its live-action predecessor, is a little more faithful to the source material and is set up as a 15-minute show allegedly for children.

Mad TV aired in reruns on Comedy Central and the Canadian sister channel Comedy Network until 2010.

Unrelated to the simulation computer game.

Tropes used in Mad TV include:
Retrieved from "https://allthetropes.org/w/index.php?title=Mad_TV&oldid=1500319"
Categories: