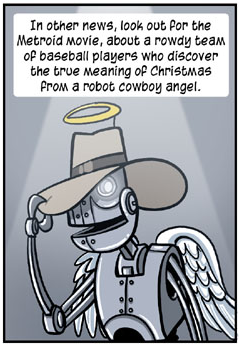 Although they weren't in Metroid, it's undeniable that the robot cowboy angel would be the coolest thing ever.

This occurs when a derivative work (an adaptation, a sequel, a remake, a reimagining) is so different from the work it took its name from that the only thing actually tying it to the original work is the title. Occasionally this will expand to include character names and the setting.

This can happen when the work was originally intended as something completely different, but, being slightly similar to an existing franchise, it is changed to fit in that franchise, or it can be straight-up title hijack. Since titles cannot be copyrighted in common-law countries (including the US, Canada, and the UK), the project may not have any relation to a famous predecessor.

Established properties are much easier to get greenlit than original ideas. In some cases producers purchase franchise rights for the name alone, and slap it on their own original product as a way of getting it pushed through the studio system. Video games and cult franchises are especially popular for this approach as they are relatively cheap to buy and, being "only" popular art, so called, any established canon for the work can be dismissed as unimportant. Many a Cash Cow Franchise has descended to this at least once.

An In Name Only work may well be decent, or even good, if it's assessed on its own merits rather than being measured by how faithful it is to the original work.

If the work in question is not an attempted adaptation of another work, but merely sports a misleading name, that's a Non-Indicative Name. If multiple works share the same name but are unrelated, you have Similarly Named Works.

Contrast Serial Numbers Filed Off, Exactly What It Says on the Tin, Expy.

Examples of In Name Only include:

Retrieved from "https://allthetropes.org/w/index.php?title=In_Name_Only&oldid=1959211"
Categories:
Cookies help us deliver our services. By using our services, you agree to our use of cookies.