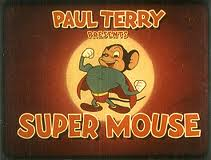 See, it's funny because it's Superman, only he's not a man, but a mouse! Ah ha ha... Genius satire.

Simply put, this trope is what happens when The Parody is created by people who Did Not Do the Research. Instead, they watched the trailer (or the commercials or just absorbed it through Popcultural Osmosis) and then wrote the parody from that. Close enough, they decide.

Therefore, the "parody" will only bear a superficial resemblance to what is supposedly being parodied. Expect the parody to coast on Parody Names, Stock Parodies and (especially in recent years) Refuge in Vulgarity.

More egregious cases will often ignore elements that justify the more ridiculous aspects of the work or mock the original for things the original doesn't even have.

Note this is sometimes unavoidable. For example, if you're parodying a film that hasn't come out yet, the trailer may be all you have to go on (although parodying something that has not yet branded itself into the public's consciousness would seem a little pointless). Occasionally, the parodists may make good guesses and succeed anyway. However, if you're making a parody of Citizen Kane and all you know is the "Rosebud" scene... well, there really is no excuse.

Also note that this trope does not encompass all bad parodies. Just knowing what you're parodying does not automatically make your parody funny... but it's at least a start.

However, Tropes Are Not Bad. Sometimes these parodies can be understood as effective parodies of trailers, of basic premises, or as exaggerations of elements in The Theme Park Version of said subject matter. For many people a Shallow Parody can be funnier than an overdone Affectionate Parody because of the lack of obscure inside jokes. Still, people who are actually fans of the subject of the parody will, more often than not, laugh at said parodies rather than with them (at best). It's notable that some of the below examples are intentional shallow parodies and derive humor from getting things wrong.

Often caused by Complaining About Shows You Don't Watch. Related: Narrow Parody, in which the target is something relatively recent due to the assumption the target audience won't recognize something older even if it's riper for spoofing; and Parody Failure, where the parody writers actually do what the piece's real creators would do, but think themselves as writing a clever spoof. Compare Outside Joke, where a joke is only funny to people who Did Not Do the Research.

Examples of Shallow Parody include:

Retrieved from "https://allthetropes.org/w/index.php?title=Shallow_Parody&oldid=1899044"
Categories:
Cookies help us deliver our services. By using our services, you agree to our use of cookies.