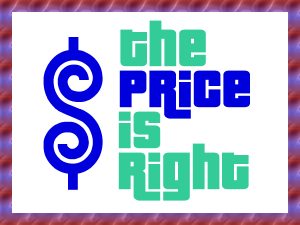 Goodson-Todman Game Show originating in 1956 with Bill Cullen as host, asking four contestants to look at a prize and guess its actual retail price; whichever contestant got the closest without overbidding won the prize. This format ran in daytime and nighttime on NBC, later ABC, from 1956-65 (moving to the latter in September 1963). The show was pastiched in a famous episode of The Flintstones.

The more familiar format, with Bob Barker and the Catch Phrase "Come on down!", debuted in 1972 on CBS daytime and can still be seen there. Concurrent syndicated series starred Dennis James, Tom Kennedy, and Doug Davidson. This format added two new elements — contestants are now chosen from the Studio Audience, and the winner of each item up for bids joins the host onstage to play one of dozens of pricing games. The hour-long format for The Price Is Right was tried for the week of September 8, 1975 and became permanent on November 3. After starting his 35th year with the show, Barker announced his retirement from TV at the end of October 2006; his final show aired June 15, 2007, and Drew Carey succeeded him on October 15.

The show has been made in many other countries, including in the United Kingdom, where it ran from 1984-2007 with Bruce Forsyth hosting for a time, as well as Australia, which featured versions hosted by Ian Turpie and Larry Emdur.