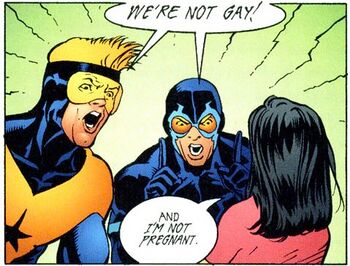 A comedy plot line in which a character wrongly believes another character to be gay, either because of misinformation received or because of the supposedly gay character's own misinterpreted words and actions. Once the character is taken to be a homosexual, all his words and actions become laden with innuendo and further misunderstandings, humor (and Unfortunate Implications) ensue.

This can often be caused with supernatural secrets, such as superpowers or lycanthropy, which aren't immediately obvious, or various other embarrassing secrets.

Almost inevitable for Heterosexual Life Partners. This plot may be the first time we've heard them explicitly say they're not gay (whether we believe them or not is another matter).

See also Comedy of Errors. When the character probably is gay but is in denial, they're in the Transparent Closet.

Examples of Mistaken for Gay include:

Retrieved from "https://allthetropes.org/w/index.php?title=Mistaken_for_Gay&oldid=1955741"
Categories:
Cookies help us deliver our services. By using our services, you agree to our use of cookies.