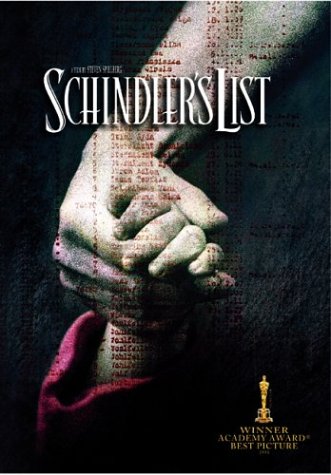 Schindler's List is a 1993 film directed by Steven Spielberg, shot almost entirely in black and white. Loosely based on real events from World War II, the film won seven Oscars; it holds a 97% Fresh from Rotten Tomatoes; and was added to the National Film Registry in 2004. The film is based on the book Schindler's Ark by Australian author Thomas Keneally -- which in turn is based on the actions of a man named Oskar Schindler.

Schindler's wife allegedly once said that Schindler himself did nothing remarkable before or after the war -- World War II, that is. He was a businessman in Nazi-controlled Germany who, while trying to profit from the German invasion of Poland, ended up running a factory using enslaved Polish Jews as the workforce. As the Nazis started to send captured Jews to the concentration camps, Schindler resisted their actions. The movie's title comes from the "lists" he kept of skilled workers that he could not afford to lose... which just so happened to be every worker in the factory. At the cost of any sort of financial security -- he was bankrupt by the time the war ended -- Schindler ended up saving over a thousand people from being killed in concentration camps.

Tropes used in Schindler's List include:
Retrieved from "https://allthetropes.org/w/index.php?title=Schindler%27s_List&oldid=1921809"
Categories:
Cookies help us deliver our services. By using our services, you agree to our use of cookies.