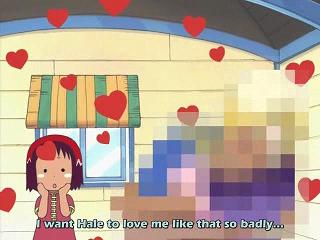 (Not to be confused with Pixilation, which is the Stop Motion animation of live actors.)

Video editors alter a section of the screen by averaging or mildly scrambling the color values of the image across larger areas than the original pixels, producing a blocky effect that obscures detail but retains much of the original hue and contour information.

Used to blur out faces (of criminals, crime victims, and undercover police officers; people who didn't sign releases to allow a show to use their likeness), offensive body parts (mostly breasts on women, the middle finger when used as a rude gesture, and anything below the waist on both sexes—that includes front and back), obscene words and written messages (mostly on T-shirts, billboards, and signs), copyrighted product names and logos which have not paid for placement (MTV does this a lot to their rap videos and on most of their reality shows, like The Real World), extremely graphic injuries (particularly the bloody stumps left behind when someone loses an arm or a leg or wide open head wounds), depictions of marijuana (be they the actual leaf or a rolled joint that's been lit and smoked), and even the years on closed-circuit date stamps (done a lot on reality shows that focus on police chases and crime, such as America's Dumbest Criminals or World's Wildest Police Chases).

A black square is still used in some cases. When played for laughs, the censor box or pixellation instantly becomes a Gag Censor (for example, superimposing a crown over the crotch of a streaker during a royal visit in Britain).

The whole screen is lightly pixellated (or blurred) in some cases, usually for a reconstruction scene in documentaries about battles.

It's interesting that a movie may have given impetus for another practice: blurring people's lips when they say an obscenity that has been "beeped" over. In the movie The Best Little Whorehouse in Texas his deputy tells the sheriff how a local TV station broadcast a tirade the sheriff made when he came in contact with the reporter: "They bleeped you out but my momma read your lips on every 'hell', 'goddam' and 'shit'." So now, a number of programs not only 'bleep' someone's bad word, they also blur the area of their lips so you can't read them.

Large pixels look plain ugly because of the chunkiness, so the pixels may be made smaller—perhaps so small as to just be a "fog" over the offensive material. Fogging like this may be a reversible transformation. A sufficiently skilled person with the appropriate software can, given a blurred image, reconstruct the original without blurring. Very large pixels make the reversal more difficult, and a solid block is of course impossible to reverse.

Also note that in Japan, any depiction of genitals in any media must be censored in some way (something Barbie Doll Anatomy usually takes care of) -- even in pornographic videos [1]

In return, many anime have begun to use it for non-censoring purposes, covering an object or such, and letting the viewers' imaginations run wild deciding what it is. This can also be used as a form of Innocent Innuendo, making something look perverted when it's (later revealed to be) really not.

Not to be confused with Pixilation, which is an animation technique.

Examples of Pixellation include: