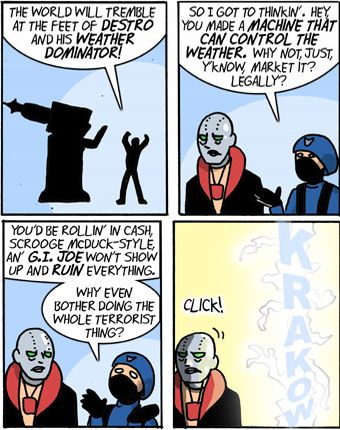 A villain who constantly fails at beating the heroes never realizes their intellect and hard work might mean they'd get a lot more done if they did an honest day's work; any attempt at going straight is simply a ruse to lull heroes into a false sense of security. This may be more a factor of maintaining the Status Quo, and it's usually mentioned that the Mad Scientist is mad after all. Sometimes Lampshaded at a villain's death with "If only he'd used his powers for good, instead of for evil." This is a dying trope as comic book characters became more complex, but was extremely common for many villains decades ago. Also, it ties closely into Reed Richards Is Useless—even if The Government gets ahold of secondhand ultratech, they just use it for ill-conceived attempts to either conquer other nations or abuse their citizens.

Consider, for a moment, the Trope Namer: Lex Luthor. His earliest incarnations were generally focused on using his Mad Scientist inventions for the sort of schemes typical in The Golden Age of Comic Books and The Silver Age of Comic Books, with the goals of pure monetary gain, "ruling the world", or eliminating Superman as an obstacle to monetary gain and ruling the world... The question is then raised as to why he just doesn't sell his amazing inventions legally.

In the Post-Crisis world, however, author John Byrne decided to finally Cut Lex Luthor a Check and recreated him as a Corrupt Corporate Executive, already a multi-billionaire captain of industry before even meeting Supes. Now, having far more cash than a man could ever spend in one lifetime, Luthor's only want is power, and while he certainly has a great deal of it already, he wants more... and Superman, he feels, is standing in his way. It's later established that he became a billionaire specifically through marketing his brilliant inventions.

In other words, the current Luthor is a far cry from a purely Mad Scientist, and thus averts the trope.

This trope could almost be a case of Reality Is Unrealistic. For all the criticisms thrown at comic book supervillains, many real life criminals make this trope Truth in Television, as seen below.

When this is avoided, the turn to the side of good is usually planned well in advance. Heroes may even precipitate it by simply asking "And Then What?" (Step Three: Profit).

Sometimes this trope is subverted by villains who start out using their talents for legitimate gain, but who end up becoming villains for one reason or another. Another subversion can be when the villain really does go straight, and is able to use the skills he demonstrated in his criminal career to land a legitimate job. This last one is Truth in Television for former criminals who manage to find legitimate work, or even start their own businesses, after getting busted. Compare Engineer Exploited For Evil. Rich Boredom may justify it because the character already is swimming in money and is seeking something else.

See Also: Fake Real Turn where a business that is serving as a front operation for a criminal activity or organization becomes so successful in its own right that characters decide to pursue it as a legitimate business. And You Could Have Used Your Powers for Good.

Compare Reed Richards Is Useless, Screw the Rules, I Have Supernatural Powers, and Dick Dastardly Stops to Cheat. Contrast Visionary Villain and Pragmatic Villainy. See also Science-Related Memetic Disorder and Sanity Has Advantages for the possible justifications of this trope. Can end up leading to Boxed Crook when put into practice.

Examples of Cut Lex Luthor a Check include:

Retrieved from "https://allthetropes.org/w/index.php?title=Cut_Lex_Luthor_a_Check&oldid=1966746"
Categories:
Cookies help us deliver our services. By using our services, you agree to our use of cookies.