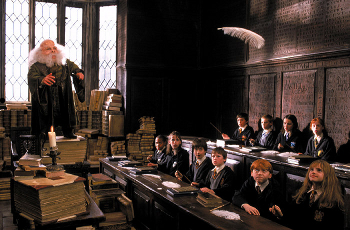 Now remember students, this spell is only to be used on feathers, and not your classmates.

In ye olden days, people learned skills by being apprenticed to someone, so it was natural to assume that magicians would learn the ropes in the same manner. Then, the modern age saw the rise of public schooling and universities almost completely displace apprenticeship as the means of education. In light of this, some authors decided that the school setting was a viable way to educate their magicians.

Thus was born the Wizarding School, the institute for education in magic. There the young sorcerers go to learn various forms of rule-based Functional Magic (after all, there's not much one can learn if the magic is random and uncontrollable), divided into different "subjects" or even schools of magic. Expect plenty of Magi Babble on the tests.

These come in two varieties; actual schools, and universities.

Schools are often boarding schools, with the attendant tropes. The pupils there are children, who leave at sixteen or eighteen. If the pupils are lucky, they'll also get a good Muggle education in math and science when they aren't learning magic words.

Universities usually only take students who are nominally adults, though exceptions may be made for rare genius. The usual university tropes apply. The students will spend half their time drinking in the local bars; the professors will be busy with vigorous academic politics, and magical research.

Often the institution where the story is set won't be the only such in the world, though the others don't do very much.

A subtrope of Extranormal Institute. Compare with Super-Hero School and Ninja School. Sometimes comes combined with a Magical Society.

Examples of Wizarding School include:

Games where a wizarding school is the primary setting:

Games where a wizarding school appears:

Retrieved from "https://allthetropes.org/w/index.php?title=Wizarding_School&oldid=1951501"
Categories:
Cookies help us deliver our services. By using our services, you agree to our use of cookies.