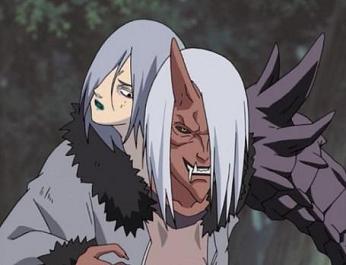 Sakon and his brother are close

Two or more characters are (for some reason) joined together into one entity. They either have one aggregate personality, or the two fight for control of the common body. They may get control of separate parts of the body, especially if there are multiple heads. Extra points if they are opposites, enemies, or of different species or sex. If the other entity is an animal, this can be a form of Animorphism.

Alternatively, it can be a case of bodily possession by a deceased cast member, or one temporarily without a body.

Can teach a lesson about walking a mile In Another Man's Shoes. It's kind of like an extreme version of Chained Heat, or a Freaky Friday that got stuck halfway through.

Name comes from Mash Up, a sort of track popular with the "remix" crowd in electronic music. Two tracks mixed together, often very different songs, into a coherent whole.

The functional opposite is splitting two aspects of a single being into two separate bodies; see notes on the Evil Twin entry.

Mix-and-Match Critters (animals made out of different beings) and especially those with Multiple Head Case might suffer from this.

Examples of Biological Mashup include:

Retrieved from "https://allthetropes.org/w/index.php?title=Biological_Mashup&oldid=1631759"
Categories:
Cookies help us deliver our services. By using our services, you agree to our use of cookies.