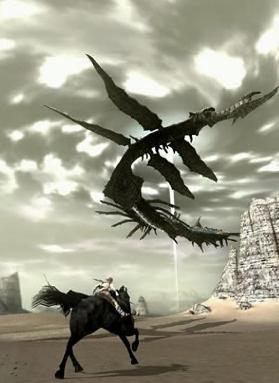 In the Forbidden Land, mountain flies over you!

Large flying creatures are a staple of Fantastic Fiction. This trope comes in a few distinct flavors:

Most Giant Flyers are simply large aerial predators who swoop down on our heroes from above. Generally, the Flying Predator version isn't outright evil.

Some Giant Flyers actually are recruits of the Big Bad. In The Tough Guide to Fantasyland, Diana Wynne Jones calls this variety "Leathery Winged Avians" (never mind the fact that many of them are feathery winged).

Giant Flyers can also be Big Damn Heroes. As mentioned in Horse of a Different Color, an animal that can fly and be ridden on is probably the most-desired fantasy mount. Where such Giant Flyers appear, expect there to be at least one scene where they must swoop down to rescue a non-flying character who has fallen from a great height. Such scenes in The Lord of the Rings earned this subtype the name "Deus Ex Machina Airlines" from the Harvard Lampoon parody Bored of the Rings.

Note that Giant Flyers can be either literally gigantic or just relatively large compared to the other characters.

Compare Giant Swimmer which, unlike its airborne cousin, is not in violation of the Square-Cube Law.

Examples of Giant Flyer include:

Retrieved from "https://allthetropes.org/w/index.php?title=Giant_Flyer&oldid=1903284"
Categories:
Cookies help us deliver our services. By using our services, you agree to our use of cookies.