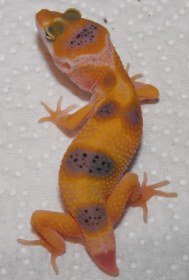 A character is hard to kill, not because he doesn't get hurt, but because he has the ability to rapidly recover from serious damage. While it depends on how fast he can heal and how much of a beating his body can take, a character with healing factor will bounce back from severe injuries that other beings can't, often with no scars or medical treatment.

Slightly more plausible than being Super Tough or Nigh Invulnerable, as it is a souped-up version of a power certain real life forms possess. When this ability is powerful enough (such as regenerating from being reduced to almost nothing), it actually becomes a form of Nigh Invulnerability, however. Rarely will a character need to worry about infection, as a super immune system is most often packaged in, but they may need to worry about setting broken bones.

Really powerful characters will be able to regenerate lost body parts. Ridiculously powerful regenerators may be able to recover From a Single Cell in a stain on the floor. Most often, loss of the head or brain injury is the only permanent damage, and even then they may come back just missing some memories or with an altered personality. Sometimes they appear to be dead for brief periods, but that's just the regeneration taking a while to deal with unusually severe damage.

On the down side, extreme regeneration often leads to the character getting targeted by The Worf Barrage so often, people go "Good Thing You Can Heal" because their Immortal Life Is Cheap. Also, regenerators are often more Made of Plasticine than the rest of the show's cast.

Note that if any real-world life form were able to recover this fast, they'd need a reserve of raw organic material to work from, and afterwards would be very hungry. The only way to justify always repairing the exact amount of flesh damaged is if it uses the actual damaged flesh to do it. Writers who acknowledge this often at least have their regenerator out of commission for some time, resting and feeding... or harvesting limbs. The effect may be compared to the rapid cell growth, differentiation and self-organization of human embryonic development if the writer is interested in any degree of scientific plausibility, but most don't bother with even that much Hand Wave; they just have the wounds close up and new tissues and organs appear. Depending on the strength of the regenerator, they may also be a practical Perpetual Motion Monster, able to go for months or years without food and water since their healing factor keeps their body alive... though this sort of Immortality Hurts.

Reptilian characters, taking a cue from real-world lizards that can shed and re-grow their tails, are likely to possess at least a minor form of this.[1] Dragons, werewolves, and vampires sometimes have it as well. Other Shapeshifting characters may have this packaged in with their powers, though it's often described as returning to their "default" form rather than regenerating. Nanomachines are a common justification for an acquired power by otherwise human characters in a technological setting.

If regenerators have an Achilles' Heel, it's most often a nasty one: either suffocation, decapitation, poison, gas, fire, ice, or acid. Other times, the weakness is similar to Clone Degeneration, each re-growth results in Harmful Healing and increasingly damaged appendages/organs/shorter lifespan.

An in-universe, as opposed to plot-based, version of Hollywood Healing. Doing this to others is Healing Hands or using a Healing Potion.

If a character can be blown to bits and reform you could be looking at Pulling Themselves Together. If it happens offscreen, this may be the explanation for an Iron Butt Monkey. If this appears in a video game without an in-story explanation, it's Walk It Off.

Also, its more properly called an Accelerated Healing Factor; "Healing Factor" simply refers to how quickly you heal- normal humans, for instance, have their own healing factor: a normal one. This is in fact what it was originally called in comic books and elsewhere; "Healing Factor" emerged because its, well, shorter.

Examples of Healing Factor include:

An arc in his main book was written to tone this down—by the same writer who had written one of the more ridiculous examples, ironically enough.It exemplifies Voodoo Shark - he could battle the Angel of Death if ever he dies in order to return to life, having beaten him before, but apparently can no longer do this.
There's also Wolverine's Opposite Gender Clone X-23, who has all of Wolverine's powers. Though the exact nature of her healing factor outside of Limbo has yet to be determined. It apparently has some limit. Wolverine's son Daken also inherited his fathers healing factor.
Finally, Wolverine's arch-enemy Sabretooth had virtually the same power-set, including the healing factor. But all that was cut to an abrupt end. Literally, thanks to Wolvie's anti-healing katana forged from the dark area of his soul.

Vampires also have this healing factor, though it may not be as strong as Buffy's. Spike was stuck in a wheelchair for several episodes, and Drusilla was heavily weakened by an attack which required a ritual to heal. In some ways it can be stronger than Buffy's, as vampires are clinically dead, they don't have to worry about things like blood loss.

Spike recovered at some point before he actually got out of the wheelchair; in one scene he reveals he'd been faking it for an unspecified amount of time. Angel has been gutted and run through an unspecified number of times, particularly in his spinoff show. Illyria also threw him through two windows several stories off the ground.

Additionally, medical technology of the twenty-third century can regrow your body from the head down in less time than it takes you to naturally heal a paper cut.

Retrieved from "https://allthetropes.org/w/index.php?title=Healing_Factor&oldid=1924543"
Categories:
Cookies help us deliver our services. By using our services, you agree to our use of cookies.