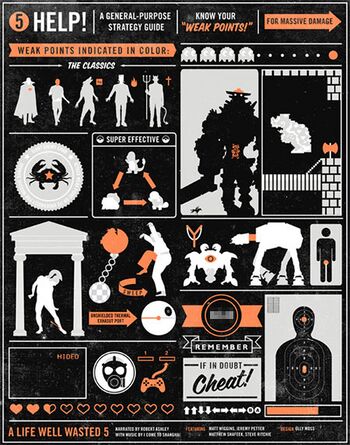 Any seemingly Nigh Invulnerable character (particularly The Dragon) will inevitably have some key weakness that can and will be exploited.

In any show where the main character is superpowered in some way, an Achilles' Heel is essentially mandated; otherwise, they would never be able to get into any kind of personal peril to drive a story. For example, the Gemini Man‍'‍s 15-minute limit on invisibility (any more and he dies), or The Greatest American Hero‍'‍s utter ignorance of the full capabilities of his supersuit.

Aliens and monsters that are Immune to Bullets will usually have a fairly Mundane Solution Achilles' Heel that only surfaces/gets discovered completely by accident when things look the bleakest. The archetypal example is the Martians from H. G. Wells' War of the Worlds, who shrugged off everything the armies of the world could muster, and then died from the common cold.

Other versions and variations of the Achilles' Heel include:

Examples of Achilles' Heel include:

Retrieved from "https://allthetropes.org/w/index.php?title=Achilles%27_Heel&oldid=1704608"
Categories:
Cookies help us deliver our services. By using our services, you agree to our use of cookies.