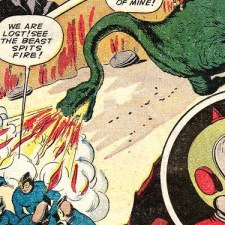 What could be worse than a t-rex? A t-rex that breathes fire.

This is a good example of a trope that appears to be changing from one thing to another. Basically, some people just can't get over how similar some dinosaurs are to dragons.

Both are big lizardy things, right? They're already so similar, why not have all dinosaurs be fearsome carnivores? Because hey—big lizard things just have to eat meat, just like dragons! And if they ever meet with humans, they must messily devour them all! Just like dragons!

And while we're at it, why not associate dinosaurs with lava-spewing volcanoes? Or even give them the ability to breathe fire? It'd be a shame not to, right?

This is especially prevalent in pulp adventure novels, B-movies, and video games set in Prehistoric worlds where Everything's Trying To Kill You.

There is a bit more justification for this confusion in Eastern media; it's largely due to a long-standing translation mixup. When people discovered fossil bones in ancient China, they figured they were dragon bones (to be more precise, bones shed by dragons who have achieved their final, fully airborne forms). Many crushed dinosaur fossils were sold over the years as "dragon bone powder." No one knows how many important discoveries were lost due to the superstition. In any case, the words for "dragon" and "prehistoric creature" in most Asian languages are very similar, and sometimes it's simply used to refer to both dinosaurs and dragons. This goes a long[3] way to explain why many Chinese dinosaurs have dragon-derived names. Not to mention why, especially in video games, dinosaur-like creatures have fire-breathing abilities and dragon-like creatures are identified as dinosaurs.

The Western origins of this trope are a bit more complicated. It may have something to do with the popular notion that associates ancient times with loads and loads of flame-spewing volcanoes. (There was a lot of volcanic activity during the Cretaceous, but it certainly was nowhere near as violent as depicted in fiction, and it had more to do with poison gas than rivers of lava and hellfire raining down everywhere.) Take a look at early paleo-art and you'll not only see tons of lava, but also many dinosaurs who look suspiciously like dragons wandering in this hellish, primeval, pre-human landscape. Some art critics, like W. J. T. Mitchell, have wondered if the older "tripod stance" seen in early depictions of bipedal dinosaurs like Tyrannosaurus Rex is meant to at least subconsciously bring to mind images of the Biblical "upright serpent". Speaking of, this trope probably has some relationship with the belief, held by both certain creationists and some cryptozoologists, that some dinosaurs survived the mass extinction and inspired the stories of dragons. Kent Hovind goes so far as to say that some species "must" have breathed fire (because The Bible — or at least the King James Version—mentions dragons) and may still exist in some Lost World in The Amazon or somewhere.

The older version of the trope is gradually becoming more and more discredited as it filters into the pop-culture consciousness that dinosaurs, really, were just another kind of animal. The newer version comes at the issue from a different angle: now it's more like Dragons Are Dinosaurs. Quite a few anthropologists are convinced that misinterpreted fossils inspired many legends of fantastic beasts. At least one has proposed that dragon legends have to be based upon (get a cold drink and a comfy seat) long-held "Racial Memories" of dinosaurs dating back to the tree-shrew days. In any case, look for fantasy worlds where wizards are finding dragon fossils and local legendary dragons who turn out to be surviving dinosaurs (you wonder how many of the latter are inspired by the true story of the Komodo dragon).

Dinosaurs Are Dragons may be considered a subtrope of Prehistoric Monster, which talks about the pop-portraits of general prehistoric life. See also Our Dragons Are Different, Here There Were Dragons, Giant Flyer, Reptiles Are Abhorrent, Ptero-Soarer, and (naturally) Somewhere a Palaeontologist Is Crying.

Note that this is not limited to dinosaurs, and can apply to other prehistoric reptiles like pterosaurs too.

Examples of Dinosaurs Are Dragons include:

Retrieved from "https://allthetropes.org/w/index.php?title=Dinosaurs_Are_Dragons&oldid=1922427"
Categories:
Cookies help us deliver our services. By using our services, you agree to our use of cookies.