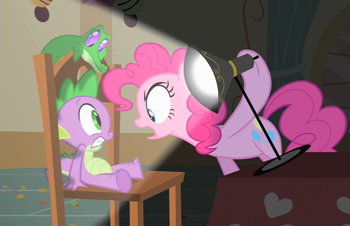 "I want you to confess!"

In the Fifties, a desk lamp in an interrogation room would be turned so that a perp would have the light in his eyes and stern questions would come out of the dark as sweat poured down his face. Sometimes, there might be a nice, cool glass of water just out of the perp's reach to "aid" his concentration. This was Perp Sweating.

There has been some escalation since the Fifties. Now the perp has to withstand any number of mind games from Good Cop, Bad Cop to False Roulette.

Two characters Perp Sweating almost never works on include The Sociopath and people with Aspergers Syndrome, totally different types of person, both on a different level of communication to you. The Sociopath will be two steps ahead of you and retaliate with a Hannibal Lecture. A person with Aspergers will be seven or eight steps behind, and get confused by subtle questions, annoyed by a Good Cop, Bad Cop routine, and clam up if you start lying to them. The savvy ones will Be as Unhelpful as Possible to get back at you. Either way you're going to have to rethink your techniques with them.

One major problem with Perp Sweating is that it is often done in an effort to elicit a confession in the absence of evidence actually proving the person's guilt. In other words, the interrogator is assuming the questioned individual's guilt even without a concrete reason. At best, this can be called poor investigative technique and at worst, it can be called a violation of the principle that everyone is presumed innocent until proven guilty.

See also Perry Mason, Columbo. But beware any attempt to try this on the Psycho for Hire, lest you be reduced to tears by a Hannibal Lecture. Also, just 'cuz it happens on teevee doesn't mean it's legal.

Examples of Perp Sweating include:

Retrieved from "https://allthetropes.org/w/index.php?title=Perp_Sweating&oldid=1748489"
Categories:
Cookies help us deliver our services. By using our services, you agree to our use of cookies.