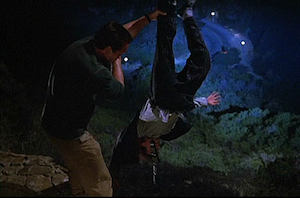 "I have to remind you, Sully, this is my weak arm!"

In fiction, just about everyone is afraid of heights so when the hardass cop or Anti-Hero finally corners one of the Big Bad's friends from his Five-Bad Band who refuses to spill the beans about his boss's Evil Plan on a very high balcony, at the top of a cliff, in a helicopter, or anywhere else that's high off the ground, that hapless mook is guaranteed to be dangled over the edge by our protagonist in an attempt to loosen his lips. With his life literally hanging in the balance, the mook finds himself in a position where he is forced to tell the badass hero whatever he wants to know or be dropped to his death.

In Real Life, however, this is perhaps the SINGLE Worst Interrogation Technique imaginable, taking the Jack Bauer Interrogation Technique to new heights in terms of unreliability. Since this method relies so much on threatening to kill the person with the information that the hero is looking to gain, that means following through with the death threat if the mook is non compliant would leave the interrogator without the information he is after or any new leads to follow. Dead men tell no tales, after all, so anyone with any bit of common sense should realize that he would need to keep his man alive if he's ever going to get some answers. Even worse, the informer may believe his interrogator will let him fall to his death no matter what he might say, anyway, which gives him even less incentive to want to cooperate. Torture may make someone committed to their ideals think their interrogator is weak; a death threat makes him look like a huge idiot. There is a variant (actually used in real-life by less than scrupulous intelligence agencies) where you are interrogating multiple suspects, and so throwing the first several to their deaths is being used largely as a device to convince the last ones in line that they really want to start talking, but of course no one has ever actually tried to use information gained in such a way as admissible evidence in a court of law.

Regardless, this technique has a whopping 100% success rate in all fictional formats. The mook will always agree to do whatever the hero asks, and the hero will always gain enough new information to move the story forward. Depending on the hero's morality, he may help his informer regain his footing as a reward for his cooperation before telling him to scram or, if he's a particularly egregious Type IV Anti-Hero or higher, he might just simply let the guy fall to his death, having outlived his usefulness (and, again, a foreseeable conclusion that the mook should easily have expected when his enemy is willing to kill and threatens his life and demands he rat out his only friends and allies). Uncommon cases where someone is dropped from a height that wouldn't prove fatal but would still be pretty harmful would qualify as Jack Bauer Interrogation Technique.

Watch out for Unhand Them, Villain! when a bad guy does this. Not to be confused with Dramatic Dangling.

A subtrope of Enhanced Interrogation Techniques.

Examples of High Altitude Interrogation include:

Retrieved from "https://allthetropes.org/w/index.php?title=High_Altitude_Interrogation&oldid=1914731"
Categories:
Cookies help us deliver our services. By using our services, you agree to our use of cookies.