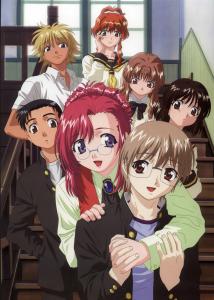 The Other Wiki tells us that "Please Teacher! (Japanese: おねがい☆ティーチャー, Hepburn: Onegai Tīchā, Onegai ☆ Teacher) is an anime television series directed by Yasunori Ide, written by Yōsuke Kuroda, and produced by Bandai Visual. It was later adapted into a manga and light novel and centers on a group of friends and the odd things that happen to them after they get a new teacher."

Problem is, she's just announced herself as his new Homeroom teacher, Mizuho Kazami. And she just moved in next door.

And the last time he saw her, she tried to wipe his memory of her existence.

One would think a situation like this would not end well, but a few hijinks later, they end up married, when Kei reveals that he's older than he looks to help keep her position (and to keep a situation from being taken the wrong way).

Unfortunately, now they have to keep his age, her origins, and their marriage a secret from Kei's friends, which is going to be difficult, as one of them is starting to get aggressive in trying to catch Kei's attention.

Please Twins! spun off from this, involving different characters at the same school. Waiting in the Summer is the third anime series of the franchise, with new characters.

Tropes used in Please Teacher! include:
Retrieved from "https://allthetropes.org/w/index.php?title=Please_Teacher!&oldid=1945796"
Categories:
Cookies help us deliver our services. By using our services, you agree to our use of cookies.