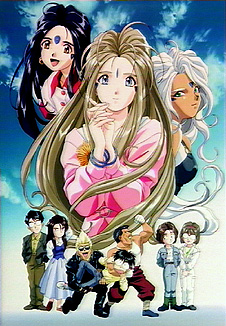 A long-running manga (November 1988 to April 2014) that tells the romantic (and comedic) story of Keiichi Morisato, a short fellow with low self-esteem studying engineering in college, and the three Norse goddesses who move in with him. Because he is a genuinely good person, the sweet and beautiful Belldandy, Norn of the Present, is sent by "The Goddess Relief Agency" in Heaven to grant him a wish. Keiichi, currently faring poorly at dating and convinced he's being set up for a practical joke by the upperclassmen in his dorm, wishes that a girl just like her would stay with him forever.

Keiichi and Belldandy enter into a very sweet, very low-key romance but then Belldandy's sultry elder sister Urd (the Norn of the Past) shows up, irritated because they haven't moved faster and into more advanced levels of intimacy. Then their kid sister Skuld (the Norn of the Future) appears, convinced that Keiichi is no good for her big sister and seeking to sabotage the relationship. Matters are further complicated by Keiichi's sister Megumi (who in the grand tradition of Bewitched knows nothing about the supernatural nature of the sisters), the demoness Mara, who has a grudge against the goddesses, and a large cast of additional supporting characters from Heaven, Hell, and the student body of the Nekomi Institute of Technology, where Keiichi attends classes.

Ah! My Goddess combines the finest elements of America's 1960's "supernatural sitcoms" with a tender and sweet love story and no small amount of both lighthearted slapstick comedy and intense drama. True to its roots, the series has a noticeably subdued use of Fan Service (at least until Urd shows up) compared with more recent Bishoujo Series. The innocent nature of the series made it receivable to a much wider audience (particularly younger readers) than regular Seinen. It was also the first exposure many anime fans in the West had to the Yamato Nadeshiko archetype.

It has spawned numerous adaptations, including a five-episode OVA series in the early 1990s (which this entry was originally written for), a motion picture, and a sequel series called The Adventures of the Mini-Goddesses. This was followed much later by two season-long TV series; one in 2005, the second in 2006 (subtitled Flights of Fancy outside Japan) which continued the story that began in the first series. Those were followed by a 2-episode TV special to celebrate the franchise's 20th anniversary, called Fighting Wings. A new "OAD" (Original Animation DVD) called Itsumo Futari de was released in 2009 and bundled with manga volume 42.

The manga was re-started in 2019 under the title Aa! Shuukatsu no Megami-sama!, with a Time Skip that allows the series to comment on the contemporary Japanese economy. Because of the economic downturn putting Keiichi's job at risk, Belldandy has to find a job of her own.

Not to be confused with Ah! My Buddha.

Tropes used in Ah! My Goddess include:
Retrieved from "https://allthetropes.org/w/index.php?title=Ah!_My_Goddess&oldid=1940818"
Categories:
Cookies help us deliver our services. By using our services, you agree to our use of cookies.