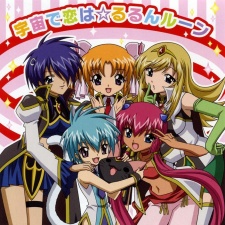 Every member of this brigade is dateable in the game. Including the little girl with the plushie.

The Token Loli is an extremely youthful-looking (though perhaps not in truth) female character in a cast that is otherwise made up of adults, or at least teenagers. Her presence is often hand-waved in some manner to explain why someone that looks so young is tagging along with a group of people old enough to be her parents: a younger sibling, Phlebotinum genetics, inherited a Plot Coupon like everybody else, a Child Prodigy who got her position early on the basis thereof, etc. Maybe she just has lots of free time. Again, note that the Token Loli doesn't have to actually be underage. She may be Really Seven Hundred Years Old, or a Robot Girl, or some other variant of the Magical Girlfriend, as long as she's still loli in appearance.

Compare Tagalong Kid and Kid Appeal Character, who are kids designed to act as Audience Surrogates for younger viewers.

The term comes from anime fandom (where its gender-flipped version is "token shota"). Because of how language evolves, the words "loli" and "shota" are relatively neutral terms in anime, originally meaning "uncomfortably sexualized little girl/boy" but now relating to any child aged 12 and under. The words still have Unfortunate Implications elsewhere.

The Other Tropes Wiki calls this "Token Mini-Moe", presumably because their advertisers don't like the word "loli".

Examples of Token Loli include:

Retrieved from "https://allthetropes.org/w/index.php?title=Token_Loli&oldid=1945782"
Categories:
Cookies help us deliver our services. By using our services, you agree to our use of cookies.