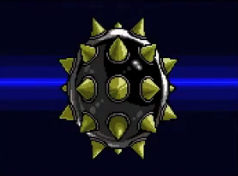 It's Deathball!!...Deathball, what are you doing here?!

A variation of Spikes of Doom: Take a sphere and cover it with spikes and you got yourself a very typical obstacle. Common in video games but also occasionally present in other media. They come in many forms:

Not to be confused with the Sea Mine.

Examples of Spike Balls of Doom include: