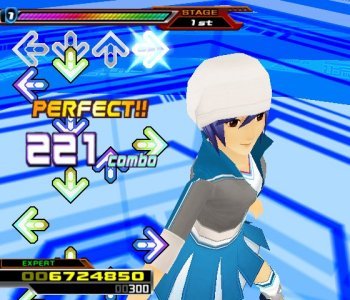 "Everybody's waiting for you!"

Instead of a controller where you sit on your ass and mash buttons, in DDR you stand on a panel with four arrows and follow the arrow that show up on the screen, by stepping on the matching arrows. Mind-numbingly easy on the lower levels, but insanely hard in the later ones. Kids seem to catch on better than adults for some reason, and a very common sight in arcades is 20-somethings being put to shame by dextrous eight-year-olds.

DDR has spawned a variety of clones, including StepMania, a DDR simulator that allows you to play with user-created stepfiles, and In The Groove, an arcade game series by Roxor Games that caters to fans of Western electronic music as well as DDR veterans looking for a challenge that got into serious trouble with Konami.

The following tropes are common to many or all entries in the Dance Dance Revolution franchise.
For tropes specific to individual installments, visit their respective work pages.

The side game DDR Mario Mix contains the following tropes: