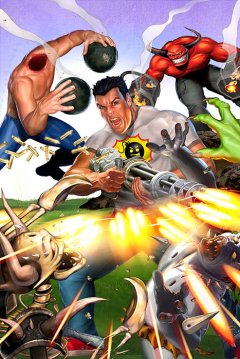 In days long past, the alien race known as the Sirians did battle with the alien overlord "Mental". Although many Sirians were killed, Mental was repelled.

In the 22nd century, Mental has returned, bringing with him a vast army that spacefaring Humanity fails to beat back. With Mental's forces pressing onto Earth, the decision is made to send a single elite back in time via rediscovered Sirian time-travel technology known as the "Time Lock" and defeat Mental in the past, thereby changing history in Humanity's favor. Sam "Serious" Stone is the (un)lucky man.

Armed with only a head-implanted AI and a self-replenishing revolver, Serious Sam battles through ancient Egypt in The First Encounter, bringing down Mental's HUGE warlock Ugh-Zan III and finding a Sirian ship in the Great Pyramid, with which he heads for space.

Unfortunately, he collides with a "Croteam Crate-Bus" and crash-lands in Mayan-era South America, which is where The Second Encounter begins. Battling across South America, Babylon and medieval Europe, Sam brings down a wind deity, a cyborg giant larva and Mental's summoner before finding a second backup ship.

In Serious Sam: Next Encounter, Mental attempts to get retaliation on Sam by creating a pint-sized evil clone of Sam.

By Serious Sam II, Sam has finally made it to Sirius, where he is made to collect five artifacts to weaken Mental and set up the overlord's downfall. The final battle has yet to come, though.

The game series was praised for being a well-made throwback to old-skool shooters where the emphasis is on massacring enemy hordes instead of dueling small, smart squads. When we say hordes, we mean hordes, especially in those nice open expanses where you truly get to appreciate how much opposition Sam's up against - and, consequently, how much of a Badass he is.

In November 2009 and April 2010 Croteam released a remake of both halves of the first game called Serious Sam HD. It features enhanced graphics, ragdoll physics, and various minor tweaks, but the gameplay is otherwise unchanged.

In February 2011, Croteam announced a more realistic-looking Prequel called Serious Sam III: BFE[1]. It came out 22/23 November 2011. It is set during Earth's final days attempting to repel Mental's invading hordes. Humanity doesn't yet know how to activate the Timelock, and Sam has been sent in with a team of EDF Redshirts to find a scientist who might know. Things go rather sour from there.

Tropes used in Serious Sam include:
Retrieved from "https://allthetropes.org/w/index.php?title=Serious_Sam&oldid=1696104"
Categories: