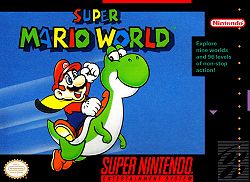 Super Mario World is a 1991 video game produced by Nintendo as a launch title for their sixteen-bit console, the Super Nintendo. It features their iconic mascot Mario taking a vacation alongside his brother Luigi and Princess Peach (then still referred to in America as Princess Toadstool) to the faraway Dinosaur Land. There, as is prone to happen, Princess Peach is captured by Bowser and kept in his castle, this time located in the deep underground. Of course, Mario must journey through the entire continent to get to her, beating down Bowser's loyal lackies/children, the seven Koopalings, along the way.

This game is most notable for having introduced the world to Yoshi, Mario's now-famous dinosaur friend and his ability to eat the baddies. The game was followed-up in 1995 with Super Mario World 2: Yoshi's Island, a prequel starring Yoshi as the player character and featuring Mario as an infant. The game is fondly remembered as one of the biggest highlights of the Super Mario Bros. series, alongside the classic Super Mario Bros. 3. It also happens to be Shigeru Miyamoto's favorite Mario game.

It is also known for dueling with the then-new Sonic the Hedgehog series, erupting in one of the biggest Fandom Rivalries of all time.

Years after its initial release, Super Mario World has a booming ROM Hack scene, thanks in no small part to the likes of Kaizo Mario World. A non-exhaustive list of such games can be found in the Game Mod Index in general, and in the category for SMW hacks specifically.

Tropes used in Super Mario World (video game) include:
Retrieved from "https://allthetropes.org/w/index.php?title=Super_Mario_World_(video_game)&oldid=1925916"
Categories:
Cookies help us deliver our services. By using our services, you agree to our use of cookies.