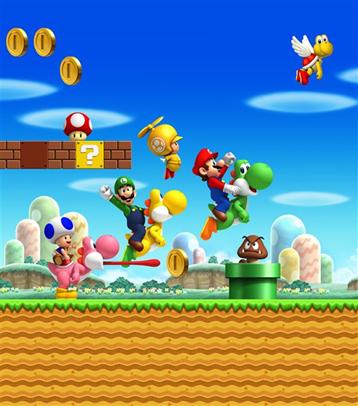 It starts out at Princess Peach's birthday party, which features an unusually large cake. It turns out that The Cake Is a Lie, and the seven Koopalings plus Junior jump out of it. They kidnap Peach (again), taking her into an airship. They fly across the Mushroom Kingdom, with Mario, Luigi, and two Toads taking chase.

Tropes used in New Super Mario Bros. Wii include:
Retrieved from "https://allthetropes.org/w/index.php?title=New_Super_Mario_Bros._Wii&oldid=1881818"
Categories:
Cookies help us deliver our services. By using our services, you agree to our use of cookies.