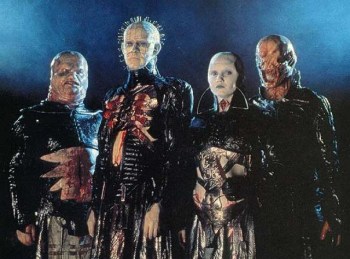 Angels to some, Demons to others.[1]

A 1987 film based on Clive Barker's novella The Hellbound Heart, Hellraiser has gone on to spawn eight sequels (only one of which - the second - Barker was directly involved with) as well as an upcoming remake. The series has at its heart a puzzle box known as the Lament Configuration, which when properly solved summons the Cenobites, a cadre of sadomasochistic Humanoid Abominations. The mascot of the series is the only recurring Cenobyte after the second film, the iconic Pinhead, played by Doug Bradley. He was given a choice, when filming the first movie, to play either the Cenobite or a workman who showed up for all of ten seconds - bet he's happy he went with the Cenobite.

Because it's a Clive Barker production, expect much Body Horror and gleeful blurring of the line between Fetish Fuel and Fan Disservice.

Films of this series include:

Tropes used in Hellraiser include:

Retrieved from "https://allthetropes.org/w/index.php?title=Hellraiser&oldid=1552426"
Categories:
Cookies help us deliver our services. By using our services, you agree to our use of cookies.