Professor Layton and the Unwound Future 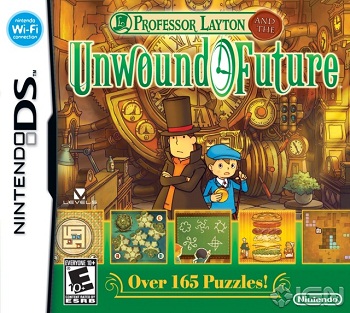 The third game in the Professor Layton Widget Series.

The first trilogy concludes with Professor Layton and the Unwound Future (Last Time Travel in Japan, Lost Future in PAL regions). One week ago, a demonstration of a time machine went horribly wrong, causing its inventor and the Prime Minister to disappear without a trace. Now the Professor has received a letter postmarked ten years in the future, as that era's Luke asks him for help to undo the chaos that Future London has fallen into.

Please place examples that apply to the series as a whole on the main Professor Layton page.

Tropes used in Professor Layton and the Unwound Future include:

Luke: This ladder should lead us down into the research facility.
Don Paolo: Ah yes, Captain Obvious to the rescue once again.

Shmarton: You're one of the fellows behind the incident at the casino, aren't you?
Future Luke: Let's say I am. What would you do about it?
Shmarton: I'd get my boss Shmelmey to give you a knuckle sandwich...if only he hadn't gone off to the bathroom!
Future Luke: Well, lucky for us, he's not here. We'll just be going now.
Shmarton: If you run off, I'll make sure my boss squishes you like a bug when he finds you!
Future Luke: Duly noted.

Flora: Nothing livens up a den of iniquity like a potted plant.

"Take one more step, and I'll rearrange your kneecaps!"

Professor Layton: And even in the future, you seem to need my help in solving [mysteries]. Your constancy can be quite a comfort in these uncertain times, my boy.
Luke: Er... Well, thank you... I think.

Claire: We had so many plans for the future. Do you remember, Hershel? I'll miss you...and our unwound future.

Claire: It looks like my time is up, at last. It was nice to see you again. It ended so suddenly. My... last time travel.

Layton: This is... utter madness.

Luke: Uh, Professor, when did you learn how to fly a plane?
Professor Layton: A plane? This is an automobile!

Clive: This isn't happening. It can't end this way. IT WON'T END THIS WAY!