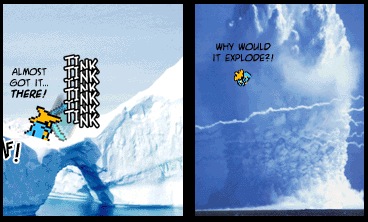 Everything Is Better With Explosions, isn't it? Well, if you spice it up to maximum, you have Stuff Blowing Up in complete defiance of science and logic.

In the wonderful world of fiction, nothing ever just breaks. If it's even slightly mechanical or electronic, its destruction is loud and accompanied by Impressive Pyrotechnics. Apparently, circuit boards, moving parts, and Tokyo are the most volatile substances in the universe.

And that's just in serious works. In comedies, anything can blow up, especially if there's an Epic Fail involved.

Objects that are particularly prone to exploding include:

Related to You Have to Burn the Web. Also related to Unrelated Effects, where the focus is on how awesome the weapon causing destruction is, rather than how explode-y the item being destroyed is. See also Incendiary Exponent and Catastrophic Countdown.

Examples of Made of Explodium include:

Retrieved from "https://allthetropes.org/w/index.php?title=Made_of_Explodium&oldid=1960158"
Categories:
Cookies help us deliver our services. By using our services, you agree to our use of cookies.