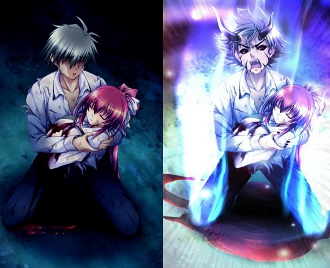 Never break this cutie as he may break you back.

"Evil is just a word. Under the skin, it's simple pain."
—Eleanor Lamb, Bioshock 2

This is a character who wants to destroy everything and everyone in the story, and is suddenly in a position to do so (on a small or large scale); but in contrast to the Ax Crazy Omnicidal Maniac, he/she has some plausible, outright tragic reason to do so, so much so that, in some cases, the characters outright sympathize with him/her (whether or not the audience does too is out of the equation here), all the while accepting that he/she must be stopped. Sometimes, the character is even portrayed as likeable, just...not with the right mindset.

The essential element is that he/she has been pushed beyond all reason. This may or may not make him/her The Woobie, but either way he/she is portrayed as having a crappy existence. This is a character who, by definition, is constantly beaten up, kicked around, and lives an all-around miserable life. Should he/she lose everything and everyone he/she trusts (be it through betrayal or in other cruel ways), and then just so happens upon the instrument of revenge against the cruel, heartless world that brought him/her so much pain, one need not be a genius to figure out unto whom shall his/her vengeful, bloodshot eyes cast his/her hateful gaze upon. Think of this person as a Jerkass Woobie, only with the jerkassery replaced by insanity (though many characters do fulfill both tropes).

This trope is less about the Sliding Scale of Villain Threat and more about how much a character has been broken—physically, mentally, and emotionally—before he/she finally snaps and blames the whole world for all the crap he/she has been through. Of course, they must crack and pose a sudden threat of some sort, to the characters and/or the setting. And some of them do get their finger on the nuke trigger. In a few extreme cases, they are the button.

Not to be confused with Mike Nelson, Destroyer of Worlds, where a bumbling but otherwise nice person accidentally destroys actual worlds, leading to What the Hell, Hero? and Nice Job Breaking It, Hero moments.

This trope is more closely related to Break the Cutie, Freudian Excuse, Bullying a Dragon, Who's Laughing Now?, and Then Let Me Be Evil. May have emerged as a deconstruction of the Cosmic Plaything.

Not the same as Put Them All Out of My Misery, which is the trope for characters who rationalize their destructive behavior by insisting that society, or the earth, must be somehow cleansed or punished for some past injustice, making it the inverse of this trope. Motive Rant, Cry for the Devil, and Straw Man Has a Point are more typical of that trope. For characters, especially villains somewhere in between this trope and that one, see Jerkass Woobie. Also note that overlaps between the two tropes are not impossible.

May overlap with Death Seeker, if they want to die, but intend to make sure that everyone else goes first. Also, be careful about applying this label to someone who did have a breaking past, and yet let the "destroyer" part override the "woobie" one and crossed the Moral Event Horizon: that's certainly a huge Draco in Leather Pants in the making.

And just to be clear, a character does not have to literally destroy worlds to fit this trope.

For actual world-destroying tropes, see Why You Should Destroy the Planet Earth.

There are several unmarked spoilers ahead! You have been warned.

Examples of Woobie, Destroyer of Worlds include:

"Nobody understands me. Everyone just die."

Frodo: But do you remember Gandalf's words: "Even Gollum may have something yet to do?" But for him, Sam, I could not have destroyed the Ring. The Quest would have been in vain, even at the bitter end. So let us forgive him! For the Quest is achieved and now all is over. I am glad you are here with me. Here at the end of all things, Sam.

"There is no Name for what I am. But, with your help, they will never see me coming...(Fade to Black)"

Terry: Freeze, you've got to get out of here. The building's about to collapse.
Freeze: Believe me, you're the only one who cares.