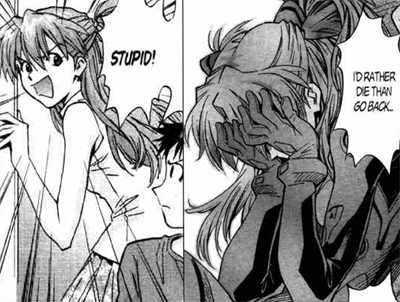 She just wants a hug--but she won't be getting one.

Normally, The Woobie is a sufficiently Moe character that:

The Jerkass Woobie, though, produces a slightly different visceral reaction: you'd like to punch them in the face yourself and you also want to hug them and say, "I'm so sorry that your life is such a mess."

This character type is defined by three elements:

This isn't a case of Defrosting Ice Queen, Sugar and Ice Personality, or Flanderization, however. The character is just that complex. From both the fans and the other characters' point of view, the character can come across as an Anti-Hero of the worst sort, or just plain nuts, and there may even be a Broken Base over whether they are a Karma Houdini, got what they had coming, or were more victim than villain. They likely think of themselves as a Butt Monkey, Cosmic Plaything, etc. It also helps if the audience gets to see just why the character is always in such a bad mood. Being the Only Sane Man or Surrounded by Idiots can take its toll on even the most patient of souls. Typically, the trope is Played for Drama or Played for Laughs as a justification for Jerk Justifications or Jerkass Dissonance.

This character type may:

The difference between this and an Ineffectual Sympathetic Villain is that an Ineffectual Sympathetic Villain is often Affably Evil, but their nasty schemes fail so miserably that you start rooting for the author to Throw the Dog a Bone while this character's evil is often less about schemes and more just a mean streak. The character's woobie nature may also play a factor in the phenomenon of All Girls Want Bad Boys.

Contrast Woobie, Destroyer of Worlds, where a pathetic but rarely cruel character destroys everything around them because they have already been broken. Not to be confused with Put Them All Out of My Misery, where a sympathetic villain seeks large scale destruction out of a desire to end misery. Also contrast Jerk Sue, where the author sympathizes with the Jerkass character, and Draco in Leather Pants, where the audience sympathizes with a character not originally intended to be sympathetic.

No real life examples, please; calling somebody this is rude and condescending.

Examples of Jerkass Woobie are listed on these subpages:
Retrieved from "https://allthetropes.org/w/index.php?title=Jerkass_Woobie&oldid=1810329"
Categories:
Cookies help us deliver our services. By using our services, you agree to our use of cookies.