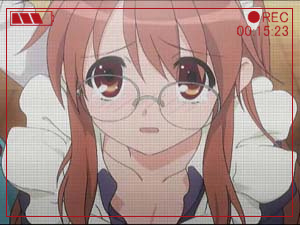 "Our documentary now focuses on the Moeblob... treat with care, they cry easily."[1]

Coined in Japan in the late 90s, "Moe" (萌え, pronounced as "Moh-Eh", derived from a Japanese word that means "budding" or sometimes "to burn") is an ill-defined otaku term that means, amongst other things, "cute", "huggable", or "endearing". While it's sometimes used to describe a series, it's more about a specific ideal or kind of character.

A common definition is that Moe is the ability of a character to instill in the audience an irrational desire to adore them, hug them, protect them, comfort them, etc. To some, it can evoke a Big Brother Instinct. Don't be misled, however—Moe can evoke such feelings in women as well as men.

Their personality will reflect an 'innocent' outlook on something vital, such as about romance. While the Moe character does bring up associations with submissive personalities in general, expect also attitudes that resemble that of a Cloudcuckoolander or a Manic Pixie Dream Girl: Moe characters usually are quirky, and rely on Costume Inertia, odd language, strange hobbies and the like to make them seem unique and noticeable. Occasionally, these quirks are completely unrelated and seem a bit disjointed. If a character is plain, they are 'loudly plain' in the way Hollywood Homely characters are 'ugly'; sometimes they're just more moderate than the rest of the cast, and the writers implicitly suggest the audience is kind for liking the character for being plain.

More on these traits can be found here.

Such characters are also prone to being used as mere Fanservice. When a character has no visible personality traits aside from vaguely cute uselessness, he/she is termed the dreaded Moe Blob. An interesting result of this is some moe characters are quasi-Animated Actors; the series they star in need not be related at all, being only devices to enable the viewer to enjoy the character. Many of them feature in Gag Series, and only the merchandise for the series shows off its intended and occasionally creepy roots.

Male characters can also have moe traits, and they figure prominently in Shoujo and Josei. Like their female counterparts, moe boys are usually ridiculously cute. The Adorably Precocious Child is a good example. Bishonen characters (particularly Troubled but Cute characters) also tend to evoke feelings of Moe in a female audience and are frequently called Moe by both fans and authors.

See also Moe Anthropomorphism, Moe Couplet, Moe Stare; compare The Woobie where the focus is about sympathy. Yamato Nadeshiko has a similar appeal but for older characters. Also see When She Smiles for situations where applicable characters get massive Moe points for finally breaking out a smile. In darker series, very likely to suffer Break the Cutie. Weakness Turns Her On is a sort of Distaff Counterpart that concerns women's attraction to moe males. Contrast Rated "M" for Manly. What Do You Mean It's Not for Little Girls? when someone mistakes a moe show that's meant for older males for a show that's meant for little girls.

No connection to a certain bowlcut-wearing would-be leader, surly bartender, or six-year-old school bully, nor to a song about a stooge by Modern Man.

Examples of Moe include:

Ur Example and Unbuilt Tropes

Retrieved from "https://allthetropes.org/w/index.php?title=Moe&oldid=1945800"
Categories:
Cookies help us deliver our services. By using our services, you agree to our use of cookies.