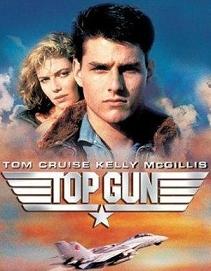 Okay, a bit more detail. Top Gun was inspired by a magazine article on Navy pilots. The screenwriters and director Tony Scott (Ridley's little brother) viewed it as "Sports Movie meets jets". In it, a hotshot pilot named "Maverick" (Cruise) is sent to the TOPGUN training school, a five-week workshop where pilots learn how to really kick ass at Old School Dogfighting. Here Maverick has to deal with competition from fellow pilots, and conquer his own demons.

The film had full cooperation from the Pentagon, and much of its aerial combat was shot "reel for real" using actual Navy hardware. (So real, somebody died making it.) It was an unanticipated success and caused an immediate boost in Navy enlistment figures, to the point that they started putting recruiting booths right there in the theatre.

The movie was named to the National Film Registry in 2015.

Tropes used in Top Gun include:
Retrieved from "https://allthetropes.org/w/index.php?title=Top_Gun&oldid=1695113"
Categories:
Cookies help us deliver our services. By using our services, you agree to our use of cookies.