Everything About Fiction You Never Wanted to Know.
Jump to navigation Jump to search
/wiki/Tom Cruisecreator 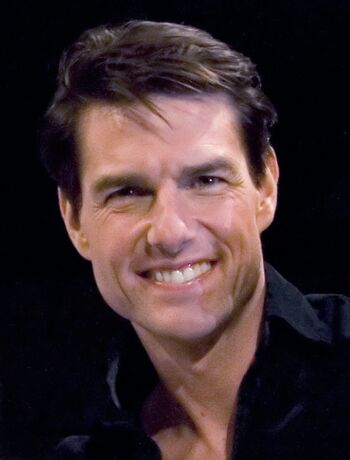 
But you'd be the only man on Earth who couldn't enjoy Tom Cruise."
—Jonathan Coulton, "Tom Cruise Crazy"

Thomas Cruise Mapother IV (pronounced /ˈtɒməs ˈkruːz ˈmeɪpɒθər/; born July 3, 1962), better known by his screen name of Tom Cruise, is an American actor and film producer. Forbes magazine ranked him as the world's most powerful celebrity in 2006. He has been nominated for three Academy Awards and won three Golden Globe Awards. His first leading role is in Risky Business. He is known for playing heroic roles, although several of his most memorable turns have been villainous roles, such as the vampire Lestat de Lioncourt in Interview with the Vampire, Vincent in Collateral, and recently[when?] foul-mouthed studio boss Les Grossman, which provides the page caption.

More recently[when?] known for his... unusual antics such as jumping on the couch on Oprah. Cruise is also known for his controversial support of and adherence to the Church of Scientology, both of which have contributed to his status as a Butt Monkey of modern Pop Culture (...at least until Charlie Sheen went bananas), and cause many people to forget his very real acting talents. On the other hand, there are people who use his acting talents to excuse his involvement with Scientology and all the morally questionable things it does, as he's its biggest and most vocal patron (and is often said to actually be running the show). These things include the possible brainwashing of actress Katie Holmes, who shortly after meeting him announced her conversion to Scientology, marriage to him, and that she was pregnant with his child almost simultaneously after she disappeared with him for a time; the suddenness of all this along with the fact that she distanced herself from her family with no real reason at the same time was very ominous to Scientology's critics, as the "church" is well-known for using classic brainwashing tactics against its members and for being extremely homophobic, thus having good reason to cover up Cruise's alleged homosexuality with an arranged marriage to a young and popular actress.

Despite all the crazy, Cruise is a genuinely good actor with some great films under his belt. He was pretty much the top movie star in the world for a good fifteen to twenty years, starting around the time of Top Gun. He opened the 2002 Oscars -- just months after 9/11 -- and gave a memorably appropriate and heartwarming opening speech, as well.

There are some indications that he may be in the process of being Rescued from the Scrappy Heap thanks to the very positive reception to his performance in |Mission: Impossible - Ghost Protocol.

Tom Cruise has performed in the following roles:
Retrieved from "https://allthetropes.org/w/index.php?title=Tom_Cruise&oldid=1681817"
Categories: