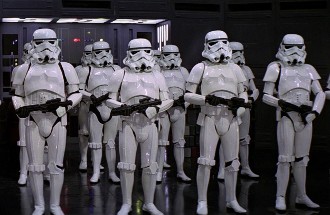 Okay, everyone, from the top! One! Singular sensation!

The Faceless also come in bulk, as demonstrated by this subset of Evil Minions whose defining characteristic—apart from being evil, of course—is the lack of individual identity. They will wear matching uniforms and helmets or masks that completely obscure their facial features. Sometimes, the (perpetually scowling) lower portion of their faces may be visible, but their eyes will pretty much always be hidden, like under the brim of a helmet, behind Scary Shiny Glasses or malevolent looking masks (especially Gas Masks or Rage Helms), or beneath an opaque visor. Note that a balaclava or Ninja mask covers everything except the eyes, but goons wearing them still count. Note that a unique face as a symbol of identity means that You All Look Familiar allows for unmasked but identical mooks to be effectively Faceless.

You'll never see any faceless goon Pet the Dog, but you will see them kick plenty of them.

The reasons for this trope are largely matters of convenience. Most obviously, the faceless goon does not display emotion; hence, he does not display humanity. It's much easier to accept characters as evil (and by extension, feel no tug of sympathy as wave after wave of them get wiped out by the heroes) if you are able to forget that there's actually a human being behind each mask. Not showing any pesky emotions to undercut their menace also adds quite a bit to the creepiness factor.

There's also the fact that it's easier on a show's budget, as the director can keep reusing the same ten extras without the audience catching on quickly. It's also helpful in animation, because you only need to design one character (or render one model in the case of video games) and one action figure. Plus, it makes it more convenient for the hero should he ever need to hide amongst the goons...

If even hurting Faceless Goons seems a bit extreme, you'll get Mecha-Mooks instead who are beaten till they show broken gears and sparks. This can also serve as a justification for why the Big Bad has so many identical soldiers running around.

A variant of this trope often occurs in Superhero comics, with the various common criminals the hero can fight as a way to bring some action into the story. They are not given backgrounds or individual personalities beyond those of petty thugs, and are typically found robbing banks, mugging defenseless citizens, and committing other crimes that the hero must stop. Not very bright, the criminals frequently try to fight the hero, even though the hero has super powers and/or special training. Of course, they never stand a chance.

What's interesting to note is that in Real Life the Faceless Goons do have upsides; if someone is behind a mask or hood or even mirrored sunglasses they often no longer feel responsible for their own actions and obey commands (especially very cruel ones) more readily than if they were just in plain clothes. Possibly a case of Truth in Television. This can, however, backfire pretty badly. Human beings have a natural, instinctual aversion to killing people. Looking a man in the eye and then killing him is a very hard thing to do. Covering a person's face, subconsciously supressing our recognition of them as human, makes killing them a lot easier on our willpower. This may be why heroes never have trouble hitting the Faceless Goons, yet the Faceless Goons can't hit the hero not wearing a mask.

These characters are usually Mooks. It's not completely unknown for the good guys' Redshirt Army to get this treatment, but nowhere near as common.

Not to be confused with Faceless Masses, Faceless Eye or The Blank.

Examples of Faceless Goons include:

At least for kendo, there is reason to look into your partner's eyes, as letting your eyes wander may give away your intention; but the eyes can remain visible as long as the mask conceals familiar facial features, and swordfighters express far more with their body-language than their eyes, which traditionally are concealed behind a helmet of some sort, anyway.

Retrieved from "https://allthetropes.org/w/index.php?title=Faceless_Goons&oldid=1856964"
Categories:
Cookies help us deliver our services. By using our services, you agree to our use of cookies.