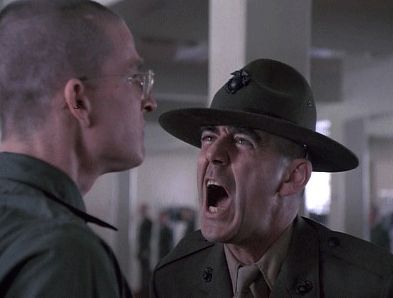 You call this a trope entry, maggot?!

His job is simple—turn the bunch of maggot recruits that are the regulars into lean, mean fighting machines. The more you hate him, the more you will learn!

The only method he knows is The Spartan Way. He yells. He carpet bombs your ears. He makes you scrub floors with toothbrushes. He will make you drop down and give him 20, 50, or whatever arbitrary number he comes up with. He is usually played by R. Lee Ermey (who actually was a Marine drill instructor for two years) or a gruff black man (see: Louis Gossett, Jr.).

On kids' TV, this same character is a gym teacher, coach, or other authority figure. Often a veteran drill instructor who has trouble hanging up the chevrons.

The episode will often imply that Drill Sergeant Nasty is "right": that, abrasive though he may be, everything he does is for your own good and everyone will come out the better for it. Of course, in the film Full Metal Jacket, the original Drill Sergeant Nasty drives one of the recruits into a psychotic breakdown, an outcome that you almost never see in any other examples.

He will often address those under his command as "maggots" or "ladies", or any other insults he can think of. He may also dish out (often derogatory) nicknames.

In Britain, the popular image is of the "Sergeant Major", who is usually much less abusive, but no less demanding, and may or may not be marching up and down the square.

In somewhat of an ironic twist, the popularity of this character has impacted real military training. Recruits often enter with at least a passing familiarity with the trope, therefore either expect it and don't take training personnel seriously who don't emulate it, or don't take it (and therefore the instructor) seriously. At first.

A very specific example of The Neidermeyer that, unlike that trope, will seldom lead his men into actual combat, because his job is to train them, then send them on to their next assignment. Compare Sergeant Rock, the guy who leads them once Drill Sergeant Nasty is done training them.

The Drill Sergeant Nasty is one of the best examples of the Genghis Gambit. It instantly provides 40 people with nothing in common with one common dream, namely the sergeant's slow, painful and embarrassing death.

Examples of Drill Sergeant Nasty include:

Your Basic Drill Sergeant, and That's "Basic" as in "Basic Training", Maggot!

You call this Advertising?!

You call this Anime or Manga?!

You call these Comic Books?!

You call these Animated Films?!

You call these Films in Live-Action?!

You call this Literature?!

You call this Live-Action TV?!

You call this Music?!

You call these Myths or Legends?!

You call this Professional Wrestling?!

You call this Radio?!

You call this Stand-Up Comedy?!

You call these Tabletop Games?!

You call these Theme Parks?!

You call these Video Games?!

You call this a Web Comic?!

You call this Web Original?!

You call this Western Animation?!

You call this Real Life?!

I've seen Anime & Manga bishonen that are manlier than you!

I've read Fan Fiction that can run longer than you can!

I've seen Films in Live-Action that can run farther than you!

I've read Newspaper Comics that have more staying power than you!

I've played against Video Games that're smarter than you!

I've laughed at Web Comics that aren't as funny as you look!

Now drop and give me 20, you worthless maggot!

Retrieved from "https://allthetropes.org/w/index.php?title=Drill_Sergeant_Nasty&oldid=1927247"
Categories:
Cookies help us deliver our services. By using our services, you agree to our use of cookies.