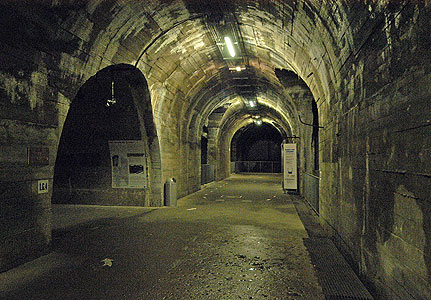 A Tunnel Network is any collection of buildings that link to a large underground catacomb of tunnels that allow for stealthy travel around a locale. Sometimes these might have been built by dedicated criminal networks for the sake of transporting things covertly from place to place. Sometimes they're built during times of war to allow a way to sneak past, or sneak up on, enemies. Less common uses of Tunnel Networks include avoiding a dangerous climate aboveground, or to serve as the equivalent of roads for those who live Beneath the Earth. Yet another use would be that shifty government laboratory that is not only underground but randomly dusty.

In the competitive gaming world, this means cheap near instant transport between any two points. A shrewd gamer will be able to take advantage of this and employ what is called tunnel popping, quickly transferring units in and out of tunnels, and all around the map to a devastating effect.

In other media, while not allowing for something as cheap as delivering a Zerg Rush to your doorstep, can allow for secretive travel between locations hiding both literal and logistical foot prints.

For its high tech equivalent, see Portal Network. Occasionally related to Absurdly Spacious Sewer. A Secret Underground Passage sometimes leads to this, but is technically a different trope. This refers specifically to a massive underground network of tunnels, not a single tunnel used for a singular purpose.

Examples of Tunnel Network include: