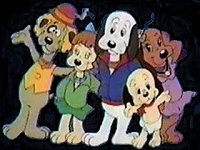 Hanna-Barbera created an animated T.V. special based on a popular line of stuffed dogs in 1985. A series appeared the next year which followed it closely, despite changing most of the voice cast. Both revolved around "the Pound Puppies", a group of dogs consisting of:

The Pound Puppies lived at a dog pound and helped other canines find good homes while taking a Masquerade as normal dogs. The puppies were cared for by their neighbor Holly, a kindly orphan girl who the dogs drop the disguise for and is a kind of Cool Big Sis. Holly lives with her guardian, an evil Cruella De Ville wannabe named Katrina Stoneheart, who hates The Pound Puppies (and dogs in general). Katrina was constantly plotting against them, with the help of her bratty daughter Brattina; their pet cat, Catgut, and occasional partner, Captain Slaughter.

The show was dramatically retooled for its second season, called "The All-New Pound Puppies" in the opening credits. What follows is a list of some of the changes:

The Pound Puppies and Holly were now freedom fighters who operated out of an Elaborate Underground Base, trying to save dogs from Katrina and hook them up with lonely kids.

The premise was then retooled once more for the 1988 movie Pound Puppies and the Legend of Big Paw, before disappearing completely, followed by the toy line in 1990, although that made an unexpected reappearance in 2007.

The sister line of toys, Pound Purries, never had the luxury of a T.V. special or series. They did make a token appearance in The Movie as supporting characters, though.

Tropes used in Pound Puppies include:

The 1988 movie contains examples of: 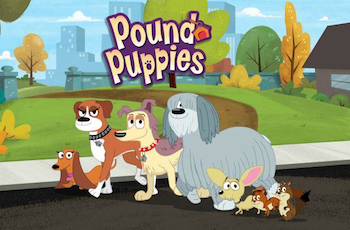 In 2010, The Hub relaunched the Pound Puppies franchise with Paul Germain and Joe Ansolabehere, the creators of Recess, at the helm.

Like the original series, a team of canines finds homes for puppies (and occasionally adult dogs), often by escaping the pound in the style of The Great Escape and Hogan's Heroes. This time around, the pound is run by Lenard McLeish, a dog catcher who is ambitious, but mostly ineffectual and ultimately harmless.

The new squad consists of team leader Lucky; right-hand dog and no-nonsense second-in-command Cookie; Squirt, the streetwise chihuahua with connections across the city; resident genius and inventor Strudel; and Niblet, the big, strong sheepdog with an even bigger heart.

Along with Mr. Nut-Nut, Sparky and the other helper squirrels, the team from Shelter 17 is responsible for matching the right pup with the right person. The shelter's success is even occasionally recognized by humans somehow... which McLeish gladly takes credit for whenever he can, much to the chagrin of the ones really responsible.

=== Episodes of the 2010 version of
Tropes used in Pound Puppies include:
Retrieved from "https://allthetropes.org/w/index.php?title=Pound_Puppies&oldid=1756494"
Categories:
Cookies help us deliver our services. By using our services, you agree to our use of cookies.