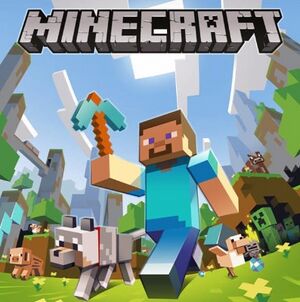 Minecraft is a 2011 cross-platform, block-based sandbox game focused on mining and crafting, along with building structures. It has three main modes: "Survival," "Creative" and "Hardcore," that can be played either single or multiplayer.

Survival features a crafting system, a day/night cycle and hostile monsters. Players are dropped into an empty world with absolutely nothing but the clothes on their back and a map. At night, zombies, skeleton archers, Giant Spiders, exploding Creepers, and teleporting Endermen roam the land (unless you're playing on Peaceful Mode [1]). The player is forced to scrounge for supplies, building up a base to protect from the nocturnal beasts while also mining deep underground for valuable materials. The landscape is also populated by more docile animals, like cows, that can be killed for their meat (which fills your food meter) and other useful items. Even after its official release, the game is constantly updated with many new features and tweaks, and players who have already paid for the game receive these for free. For more details about Survival mode, refer to the analysis section.

Creative is a simple sandbox mode. Players can place or destroy blocks as they see fit, and can switch between various kinds of blocks. For the most part, it's focused solely on building, and can be used to easily make very large structures or pixel art. Creative removes the health bar, gives the player infinite access to every item/block in the game, lets the player spawn nearly every kind of mob[2] and gives them the ability to fly.

Minecraft became a worldwide sensation, selling hundreds of millions of copies[3] and popularizing Let's Plays on YouTube (like those from Yogscast) along with attracting a dedicated modding community and launching a multimedia franchise. Countless creations have been made inside the game, from the Starship Enterprise to portions of Westeros. With its addicting gameplay, iconic imagery and intuitive mechanics, Minecraft is one of the defining games of The New Tens.

Notable for its frequent updates and famous creator Notch (now working on other projects, having turned Minecraft and Mojang over to Microsoft). It was originally intended as a Spiritual Successor of the free game Infiniminer and is inspired by Dwarf Fortress as well. The full game was released on November 18, 2011.[4] The game also exists as a mobile version for Android and iOS. Also available for most modern game consoles (Xbox 360, Play Station 3, PlayStation Vita, PlayStation 4, Xbox One, Wii U).

Worth mentioning, one of the texts that can pop up at the title screen is "Less addictive than TVTropes!"

Tropes used in Minecraft include:
Retrieved from "https://allthetropes.org/w/index.php?title=Minecraft&oldid=1934167"
Categories:
Cookies help us deliver our services. By using our services, you agree to our use of cookies.