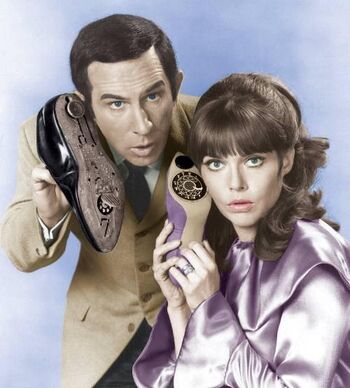 Spy fiction parody from The Sixties created by Mel Brooks and Buck Henry. Definitely a Sitcom. It starred Don Adams as CONTROL agent 86 Maxwell Smart, a bungling but perpetually optimistic secret agent who often managed to save the day and defeat the bad guys almost despite himself, and Barbara Feldon as his partner, Agent 99, a slightly daffy Seductive Spy. They received their assignments from CONTROL's hapless chief.

Offered a tremendous number of Catch Phrases, largely at the insistence of star Don Adams, who knew they would help make the series succeed. The series run from September, 1965 to September, 1970, A total of 138 episodes in five seasons, with the first four airing on NBC and the fifth on CBS.

Get Smart was revived three times:

In June 2008, a Get Smart feature film remake was released, starring Steve Carell as Max and Anne Hathaway as 99.

Tropes used in Get Smart include:

The 1995 sequel series provides examples of

Retrieved from "https://allthetropes.org/w/index.php?title=Get_Smart&oldid=1959514"
Categories:
Cookies help us deliver our services. By using our services, you agree to our use of cookies.