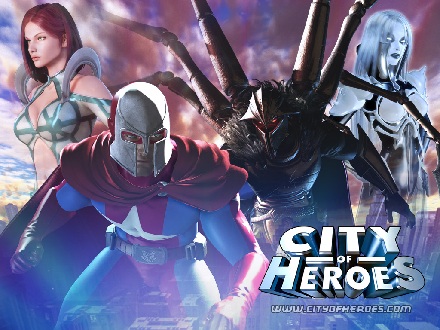 City of Heroes is the formerly-defunct Massively Multiplayer Online Role Playing Game based on comic-book style superheroes. Set in and around Paragon City, a fictional Rhode Island metropolis still recovering after a thwarted but still disastrous Alien Invasion, it superbly reproduces the flavor and feel of the superheroic genre. Players take on the role of one of many fledgling heroes surging to fill the void left in the wake of several heroes fallen in defense of the earth during the aforementioned "Rikti" alien invasion.

City of Heroes is complemented and paralleled by a villainous counterpart, City of Villains. Originally, players of City of Villains assumed the role of a freshly escaped super-powered convict who may fit into a prophecy about a "destined one" whom it is said will rise to threaten even the most powerful echelons of the Rogue Isles villain factions. The two games overlap in select areas, including PvP zones and a no-conflict nightclub in another dimension called "Pocket D". The two games, originally separate, were eventually combined, and afterwards players could make both heroes and villains.

The subsequent Going Rogue expansion then allowed characters to change alignment repeatedly and expanded a mirror universe previously used as the setting for several adventure arcs into a third complete starting location.

Some of CoH/CoV's most innovative features are related to character/avatar design. The games provide a truly astounding variety of appearance combinations, which grew with each new version. The power combinations were similarly impressive.

The game was also the first major MMO to include user created content, in the form of its Mission Architect system and player-created story arcs.

Originally, a variety of (back)story was told through the developers' adopted avatars—known collectively as the Avengers-esque super-team the Freedom Phalanx—with the hero Statesman as their (in-game and out) leader. Their evil counterparts would later be introduced in City of Villains. Known as Arachnos by name, led by Statesman's equal-but-opposite in Lord Recluse, who not only ran the organization but ruled an entire country in which it was based: the Rogue Isles (a fictional archipelago about 50 miles north of Bermuda). Statesman was originally the in-game avatar of real life senior developer Jack Emmert, who moved on and left the game in the care of Lead Developer Matt Miller (known for his avatar, Positron), who himself moved down to hands-on design work, handing the role of Lead Developer to Melissa Bianco (known for her avatar, War Witch).

With an update (that also changed the game from subscription-only to a Freemium model), most character classes (called Archetypes) became available to both sides from the start, except for the respective Epic Archetypes, described below. The tutorials for both hero and villain sides were replaced with a scenario which owed much to the Praetorian side tutorial, in which the player was guided through learning various mechanics to a "There I was" moment in the middle of a disaster, making a moral choice along the way which determined if the character was a hero or villain.

There are also two "epic" hero archetypes, (originally unlocked once one of your heroes reached level 20, but now available right away): Peacebringers and Warshades. The result of a human merging with a symbiotic alien, these have unique abilities, such as intrinsic travel powers and shapeshifting. Their power sets appear at first fairly similar, but they tend to play very differently. Warshades play to the strengths of their teammates, while Peacebringers tend to make up for their weaknesses. Also, Peacebringers are much more self-sufficient (e.g. if you want to heal yourself, you just press the button and get healed), while Warshades need enemies (or their bodies) to drain for their self buffs. To compensate for this the Warshade buffs scale upward with the availability of enemies to drain. When playing Dual- or Tri-Form, Peacebringers tend to stay in one form for the duration of the fight or even the mission, while Warshades often switch forms as needed to maximize the gain from their various buffs. The powers of their respective human forms are mostly a combination of Blaster and Scrapper for the Peacebringer, and Blaster and Controller for the Warshade.

Just like the heroes, there are two epic archetypes for the villains. Starting out as a member of the Arachnos faction, you could take the role of a Wolf Spider (Arachnos Soldier) or Blood Widow (Arachnos Widow). Each has two branches of development after a certain level. Wolf Spiders represent the rank and file soldiers, starting with guns while then adding cybernetic attachments or specialized tech-maces, while the Widows start out as pseudo-ninjas and could either stay as such or become a combat psychic. However, regardless of branch, you ultimately play as a damage type with some quirks (and a cool costume).

Upon the revival of the game (see below), a new hero archetype, the Sentinel, was added. The Sentinel combines substantial ranged combat abilities with mid-level protective powers, as well as protection against control powers.

The second major expansion, Going Rogue, opened a third beginning to the game, the Praetorians. Praetorian characters are able to play as any of the non-epic archetypes and start off neither good nor evil; instead they have multiple opportunities over the course of the first twenty levels to chose whether they will be a Loyalist of the tyrannical Emperor Cole or join the terrorist Resistance against him, and if they will be ethical/noble or not in that role. It also introduced the ability to change alignment via Face Heel Turn or Heel Face Turn, allowing a hero to become a villain or vice versa as well as opening up the in-between alignments of Vigilante and Rogue.

In addition to their powersets, characters also choose an origin. Outside of Peacebringer (Natural), Warshade (Science), and the Arachnos archetypes (Natural), there were no limits placed on which origin can be used with what archetype/powers. It is possible to make one of your characters' powers, say, "Assault Rifle" with Magic Origins, and it doesn't make a bit of difference to your abilities. The effects of origins tend to be seen in choices of contacts and mission offers instead, although you are never "locked in" to any particular series of contacts or arcs. Later, with the revamp of the opening game this was substantially reduced, leaving choice of origin more a "flavor" element than a game mechanic.

Heroes defeat NPC villains and foil the plans of various archvillains and nefarious groups out to destroy Paragon/The World/Humanity. Villains carry out missions against NPC heroes or other villain groups to please various factions and power brokers and thereby improve their standing in the underworld. Player-vs-Player combat is limited to restricted areas and is not necessary for game or level progress, although certain bonuses can be gathered by risking yourself in these areas.

There have been two novels based on it, Web of Arachnos and The Freedom Phalanx, as well as two comic book series, one published by Blue King and the other by Dark Horse Comics. A movie and T.V. series based on the game were at one point in Development Hell, but are no doubt entirely dead now.

City of Heroes managed to stay alive for so long despite being only a few months older than the massive World of Warcraft juggernaut largely by occupying a niche market and having a die-hard, rabidly-devoted fanbase. However, this was not sufficient to keep owners NCSoft from shutting down the game (albeit with several months' notice) in late 2012. The move came as a complete surprise to the staff of Paragon Studios, who were in the process of designing and implementing at least a year's worth of new content at the time, and who were unceremoniously canned simultaneously with the announcement of the game's impending demise. Exactly why NCSoft killed a popular, groundbreaking game that earned them in excess of US$2 million every month is unknown. The company's few "explanations" were vague and confusing; industry observers and pundits generally agreed that the move made little to no sense. Additionally, NCSoft rebuffed all efforts to buy or license the game from them, apparently preferring to lock it up and throw away the key rather than earn any kind of money on the property. One of the more interesting speculations about their motivation was that it was a combination of face-saving for the Korean company and a deliberate slap at former NCSoft executive Richard "Lord British" Garriott, who had overseen COH's creation and had just won US$32 million in damages from NCSoft in a lawsuit over how they'd forced him out of the company. (Another, very detailed, analysis for the death of COH can be seen here.)

In April 2019, after many failed attempts to reverse-engineer the server code for the game, it was discovered that a private server (running on leaked binaries) had existed since about a year after the game had been shut down. This never leaked since the group running this server carefully vetted every member. After a couple days of rage the code for the server was released to the community; the rage was promptly forgotten (mostly) and many independent servers shot up overnight, despite a brief panic caused by a bogus "legal threat" apparently forged by a Troll. The first and most successful of these, Homecoming, boasted in excess of 100,000 users by the end of the year, and immediately entered into negotiations with NCSoft (apparently still in progress as of the beginning of 2021) to legitimize its presence on the Net.

Meanwhile, the established "clean-room" efforts to create or recreate City of Heroes servers continued, ignoring the existence of the original code. As of Fall 2020 a tentative beta release has been announced.

The powers the game offers to players provide examples of:
Retrieved from "https://allthetropes.org/w/index.php?title=City_of_Heroes&oldid=1947767"
Categories:
Cookies help us deliver our services. By using our services, you agree to our use of cookies.