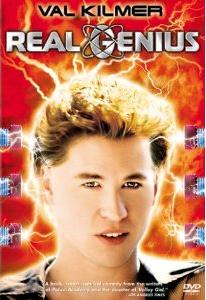 The movie starts out about Mitch, a 15 year old boy who designs a cutting edge laser for his high school science fair. This gains him the attention of Jerry Hathaway, who offers to enter the wunderkind at Pacific Tech as an accelerated student. There, Mitch takes classes taught by tape recorder[1], and he meets the irreverent Chris Knight, who teaches him that he can't take everything so seriously, particularly when the younger kid ends up as the butt of this school's Jerk Jock -- though as this is an all science and engineering school the Jerk Jock types are all other geniuses themselves.

Chris and Kent (the Jerk Jock in question) are competing for the same post-graduate position under their professor, Jerry Hathaway -- who is in fact a vain man who hosts an educational TV show (think Cosmos with Carl Sagan). Chris' lighthearted attitude rankles Hathaway and the professor threatens Chris. Chris doesn't let it get to him. Kent, on the other hand, toadies to Hathaway. Kent sabotages Chris' and Mitch's project, but they eventally triumph anyway.

And then Chris and Mitch discover Hathaway has taken their research for military applications. Chris doesn't approve, so he gets the good genius kids of the university to help him take revenge on the greedy professor, and Kent too.

Tropes used in Real Genius include:

Chris Knight: "Relax. That's just the fuses at the substation, they'll have it back on in a minute. Maybe I shouldn't have shorted across the building transformer. But more important: did we get a charge?"

Mitch: "And from now on, stop playing with yourself."
Kent: "It is God!"

Jordan: I never sleep, I don't know why. I had a roommate and I drove her nuts, I mean really nuts, they had to take her away in an ambulance and everything. But she's okay now, but she had to transfer to an easier school, but I don't know if that had anything to do with being my fault. But listen, if you ever need to talk or you need help studying just let me know, 'cause I'm just a couple doors down from you guys and I never sleep, okay?

Chris: You see Mitch, I used to be you. And lately I've been missing me so I asked Dr. Hathaway if I could room with me again and he said sure.

Chris: When I was three years old, I balanced my father's checkbook. They sent me to school and fired their accountant. My father was so intimidated, he stopped speaking to me. My teachers disliked me because I was smarter than they were. My classmates hated me because I broke the bell curve. Sound familiar? My mother dressed me in white shirts, hush puppies and a briefcase, guaranteeing that no girl would ever talk to me.

Kent: Hello, Jerry!
Hathaway: I told you before, Kent: you don't get to use my first name.