Everything About Fiction You Never Wanted to Know.
Jump to navigation Jump to search
/wiki/Vincent Pricecreator 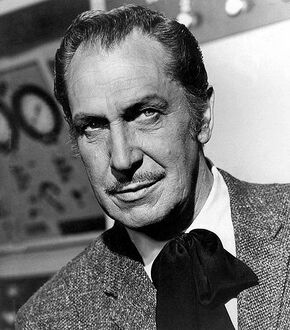 He of the very distinctive voice (1911-93). Appeared in The 13 Ghosts of Scooby-Doo as Vincent van Ghoul. His other television credits include the PBS series Mystery! and the 1950s Game Show turned interview show ESP. As the villain of such classics as The Abominable Dr. Phibes, House on Haunted Hill, and House of Wax, he and Peter Lorre have the two most homaged voices when it comes to evil cartoon characters.

He also provided the creepy voice and Evil Laugh in Michael Jackson's Thriller and Alice Cooper's "Devil's Food". On the 1960's Batman TV series, he had a semi-recurring role as the world's greatest criminal mind, Egghead. He was one of only two villains (the other being King Tut) to deduce Bruce Wayne's secret identity.

Price was good friends with the two great Hammer Horror actors, Christopher Lee and Peter Cushing, and starred alongside both of them in various films. Strangely enough, Lee and Price were born on the same day, and Cushing one day before them. One of his closest friends was the above mentioned Peter Lorre, whose eulogy Price read at his funeral.

Highly eccentric, he considered his guest appearance on The Muppet Show a 'tremendous honour' (before the show really became a worldwide sensation), in a similar manner to how major musical artists know they've 'made it' when "Weird Al" Yankovic parodies their songs. Price was also an art historian and expert cook.

Vincent Price provides examples of the following tropes:
Retrieved from "https://allthetropes.org/w/index.php?title=Vincent_Price&oldid=1510369"
Categories:
Cookies help us deliver our services. By using our services, you agree to our use of cookies.