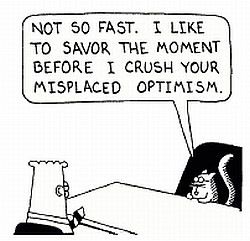 "I needed someone who acts like a friend but secretly delights in the misery of all people."

A Faux Affably Evil character's demeanor is an act. At heart, they're utterly soulless, but they mask it with a pleasant, polite, "normal" attitude, perhaps because they have social standards to live up to or because their pleasantness reflects their sheer enjoyment of evil. It's anyone's guess what this kind of villain will do if they suffer a Villainous Breakdown; maybe they will drop all pretenses and find that they are Not So Above It All or maybe they will fall into a state of Dissonant Serenity, blabbering off-kilter pseudo-mannerisms as they lapse into their final and greatest puppy-murdering spree.

Do not confuse with Laughably Evil, which is a villain who is funny rather than polite. While many Faux Affably Evil villains are also Laughably Evil, many other villains are one but not the other. Compare and contrast Affably Evil (whose affability is sincere) and this Trope's opposite, Noble Demon (whose demeanor is evil in contrast to their actions). For the Evulz is a common motivation, though using this trope as a form of Obfuscating Stupidity is also possible. Also see Bitch in Sheep's Clothing, where a Jerkass is hiding behind a Nice Guy facade, and Stepford Smiler, when a miserable or mentally unstable person is hiding behind a cheery and sweet facade. Compare Sugary Malice.

Examples of Faux Affably Evil include:

Retrieved from "https://allthetropes.org/w/index.php?title=Faux_Affably_Evil&oldid=1946564"
Categories:
Cookies help us deliver our services. By using our services, you agree to our use of cookies.