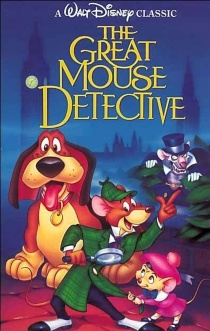 Basil, The Great Mouse Detective in the UK.

A 1986 Disney Animated Canon masterpiece (number 26) with no Medieval European Fantasy setting, no True Love's Kiss, and no princesses (although there is a mouse version of Queen Victoria...) More importantly, the reasonable success of this film after The Black Cauldron debacle was able to convince the new senior management of Walt Disney Pictures that their animation department had a future after all.

This Animated Adaptation of Basil of Baker Street, a series of children's books by Eve Titus, tells a story of Sherlock Holmes in a Mouse World. When toymaker and mechanical genius Hiram Flaversham is Kidnapped Scientist, his daughter Olivia hires the greatest detective in all mousedom, Basil of Baker Street, to find him. On her way, she is found by the Narrator and Dr. Watson's Captain Ersatz, Dr. Dawson, just back in London after serving overseas in the military. Basil is reluctant to take the case until he realizes the bat who kidnapped Olivia's father works for his Arch Enemy, the Diabolical Mastermind Professor Ratigan.

With the help of his trained hound, Toby, Basil tracks the bat to a human toy shop, but he escapes and kidnaps Olivia. Ratigan uses her to force her father to complete a robot duplicate of the mouse queen as part of his Evil Plan to take over the kingdom. After learning Basil is on the case, the Evil Genius decides to use this as an opportunity to humiliate and defeat his rival once and for all. Basil falls for his trap hook, line, and sinker and, with some encouragement from Dawson, narrowly escapes the Death Trap in enough time to save the queen and engage Ratigan in a Chase Scene by air that culminates in a gruesome Monumental Battle at Big Ben.

Oh, and there's a Victorian strip tease in a Bad Guy Bar -- sung by Melissa Manchester, no less -- followed up with a Bar Brawl.

Tropes used in The Great Mouse Detective include:
Retrieved from "https://allthetropes.org/w/index.php?title=The_Great_Mouse_Detective&oldid=1970280"
Categories:
Cookies help us deliver our services. By using our services, you agree to our use of cookies.