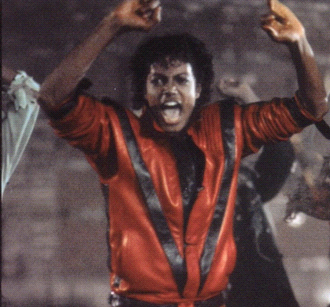 Originally a member of the Motown act the Jackson 5, Michael Joseph Jackson (1958-2009) debuted as a solo artist in 1971 -- the year he turned thirteen. His full-fledged solo career took off in the late 1970s. Though songs from his first serious solo effort, Off The Wall (1979), were popular, he reached super stardom in 1982 with his album Thriller. Thriller is currently the only album in history to have sold more than one hundred million copies -- beating the number two album by more than double.

Known as the King of Pop, he is the most successful recording artist in history, with his music influencing much of the genre in the 1980s and early 1990s, his music videos breaking the color barrier on MTV. He also had a video game based on him. All of this resulted in a total of 13 Grammy Awards. Then he released his next album, Bad, which was also a big hit.

As the definitive celebrity of The Eighties, he cultivated a Reclusive Artist persona and a reputation for high eccentricity. In particular, he created the Neverland Ranch, a grand estate where he could finally live the childhood he never had, since he and his siblings had spent most of their childhood and teen years performing under the heavy, often abusive hand of father Joe. It featured a zoo and an amusement park, and frequently hosted visits from ill and/or underprivileged children.

In 1993, in the wake of his fourth solo album Dangerous, Jackson was accused of molesting a young boy. Because this both contradicted his image as a friend to children and was not implausible in light of the various rumors of his extreme eccentricity -- in particular, his alarming changes in appearance over the past fifteen years, chalked up to plastic surgery and the skin disorder vitiligo -- it made international headlines. When Jackson settled a civil suit with the boy's family out-of-court over the matter, it left the case too thin to prosecute since the boy was no longer willing to testify, and the circumstances of the allegations suggested it might have been an extortion attempt all along.

However, the damage was done, and in the U.S. he became less known for his artistic output [1] than his ever-strange personal behavior. He had a brief marriage to Elvis Presley's daughter, he dangled one of his infant children over a Berlin hotel railing to show him to fans, and worst of all a second round of molestation allegations which unfolded over 2003-05 resulting in a not guilty verdict.

Jackson died due to an overdose of propofol on June 25, 2009, at the age of fifty, a few weeks before the start of a long-awaited series of shows in London that were to serve as a comeback. In late August, his death was ruled a homicide. His death occurred during an almost surreal two-week period between June 21 and July 4, which was densely populated by celebrity deaths including those of Ed McMahon; Sky Saxon; Farrah Fawcett (who died on the same day, no less); Billy Mays; Mollie Sugden; Harve Presnell; Karl Malden; and Steve McNair, in what has been dubbed the "Summer of Death" or the "2009 Celebrity Death Wave". David Carradine died two weeks before the beginning of this period, but is often included with these folks anyway. The doctor who administered the overdose was found guilty of Involuntary Manslaughter in November of 2011.

His memorial service on July 7, 2009 at the Staples Center in Los Angeles was broadcast live around the world, watched by up to one billion people.

He is interred in Forest Lawn Memorial Park Cemetery, in Glendale, California, among many other entertainment legends.

There is a movie featuring footage of his rehearsals for his London live shows.

Michael Jackson provides examples of the following tropes:
Retrieved from "https://allthetropes.org/w/index.php?title=Michael_Jackson&oldid=1850861"
Categories:
Cookies help us deliver our services. By using our services, you agree to our use of cookies.