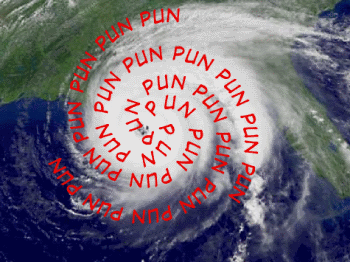 It'll storm right in and blow you away with a punishing deluge of wittery. And that sucks.

A sudden, protracted volley of puns. Approach this technique with caution, as viewer nausea (or a lynch mob) may be a side-effect.

In a Sitcom, a Hurricane Of Puns often appears after one or two characters have done something embarrassing and decide to not talk about it. Naturally, every conversation they have is rife with unintentional puns and Freudian Slips that go unnoticed by others but drive them to sheer panic.

On the other hand, sometimes these storms approach from the opposite direction... One person cracks a pun, another feels the urge to one-up it, and so it goes until the ammunition is exhausted and the puns fall silent.

Rarely, someone will just rattle off a string of puns for the hell of it.

Puns are a dangerous form of comedy, and it takes a good hand to make them into something that won't incite a mass groan of disapproval. Doing this repeatedly is even riskier, as it requires an amazing level of ability to play straight on most television aimed at mature viewers.

In Anime, the Gag Series is also famous for using the Hurricane of Puns. Japanese comedy is quite fond of puns and malapropisms, because of how certain words and names in the Japanese language can be misquoted or alternatively written. This is one reason why many Widget Series don't translate into other languages very well, or get treated to a Gag Dub instead. Puns that must be explained usually end up not being funny.

This is a subtrope of Rapid-Fire Comedy. Compare Hurricane of Euphemisms, and see Just for Pun.

Examples of Hurricane of Puns include:

Retrieved from "https://allthetropes.org/w/index.php?title=Hurricane_of_Puns&oldid=1945588"
Categories:
Cookies help us deliver our services. By using our services, you agree to our use of cookies.