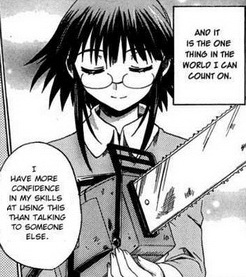 Sometimes you'll come across a girl, often cute and sweet-looking... but she'll be brandishing some sort of scary weapon at you in a murderous fashion! EEEEEK! Run for the hills!

Most commonly the weapons are knives, but other psycho weapons are also common (not only in anime, but increasingly in movies, too), such as chainsaws or other instruments of pain and destruction.

She's usually also Yandere, or, failing that, Cute and Psycho.

Examples of Girl with Psycho Weapon include:

Retrieved from "https://allthetropes.org/w/index.php?title=Girl_with_Psycho_Weapon&oldid=1920370"
Categories:
Cookies help us deliver our services. By using our services, you agree to our use of cookies.