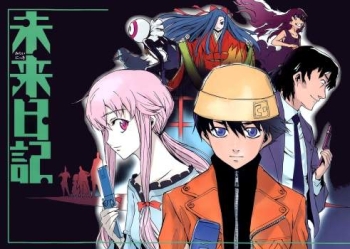 Mirai Nikki (literally Future Diary) is a dark Manga about the asocial Yukiteru Amano, who obsessively keeps journals. One day, he finds that his imaginary friend Deus Ex Machina, the lord of time and space, has made his cell phone diary able to predict the future. After getting over the initial shock of having a supernatural cell phone, Yuki enjoys his new-found powers until he comes across a diary entry stating his exact time of death...

After taking out his would-be murderer, Yuki is invited to a gathering with ten other people, where Deus explains that they are now in a Battle Royale for the position of God. Some of the diary holders have personal reasons to claim the throne; others are psychotically insane. And soon enough, young Yuki finds himself without any true friends or allies aside from the curiously Yuki-obsessed participant, Yuno Gasai...

The common traits of all twelve diaries are as follows:

Mirai Nikki also has two spin-off manga. The first is Mirai Nikki: Mosaics, focusing on the ninth diary holder Minene Uryu and expounding on several of the minor characters. The second is an Alternate Timeline spin-off, Mirai Nikki: Paradox, in which Aru Akise replaces Yuki as the main character.

The manga was licensed by Tokyopop, and released in the United States as Future Diary; 10 of its 12 volumes were released before the US branch of the company went under. An animated adaptation aired between October 2011 and April 2012 with a pilot OVA released beforehand.

A new live action drama called Mirai Nikki: Another World began airing in Japan on April 1, based in alternate world featuring a familiar plot but with a new cast of characters. Most are expies of the original characters with some differences. Arata Hoshino takes Yuki's place, a Lazy Bum of a college student who has no interest in his future. That is until he receives a limited release cell phone from his friend Rui Moriguchi which happens to have the Future Diary's powers. Now stuck in his own survival game, with his own version of Yuno for company.

Definitely not to be confused with Yume Nikki.

Character sheet for this series is now open for business.

Tropes used in Future Diary include:

The anime features the following tropes

Retrieved from "https://allthetropes.org/w/index.php?title=Future_Diary&oldid=1964255"
Categories:
Cookies help us deliver our services. By using our services, you agree to our use of cookies.