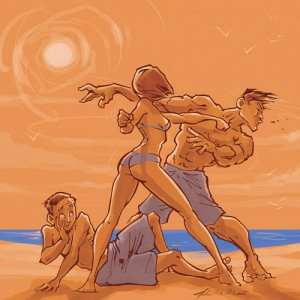 Seems harming that guy was a really bad idea. His girlfriend is gonna kick your ass.

This is common with an Action Girl, Hot Amazon, Cute Bruiser or Lady of War. Sometimes a Butch Lesbian will act this way about her girlfriend due to the stereotype of being stronger and more "dominant". Personalities associated with it include Tsundere and Yandere. A Non-Action Guy or dudes otherwise incompetent in combat seem to attract these women. Most types of The Woobie (except Jerkass Woobie and Woobie, Destroyer of Worlds) also draw the attention of these types of women out of an instinct to ease their suffering.

Sometimes, if she herself doesn't treat her boyfriend exceptionally well, there can be a variant what can be summed up as, "Hey, nobody picks on him but me."

Compare to Understanding Boyfriend for the inverted variant. See also More Deadly Than the Male, Action Girlfriend, and Bodyguard Crush. A mutually violently protective couple is a Battle Couple.

Examples of Violently Protective Girlfriend include:

Retrieved from "https://allthetropes.org/w/index.php?title=Violently_Protective_Girlfriend&oldid=1924482"
Categories:
Cookies help us deliver our services. By using our services, you agree to our use of cookies.